A blip is when viral load goes above 50 copies/mL for a short time and then drops back down. See Figure 1.

Most blips are not detected because viral load is only tested once or twice a year in people on stable treatment.

Blips can be caused by other infections, such as flu or herpes, or a recent vaccination.

Some blips are just lab errors. 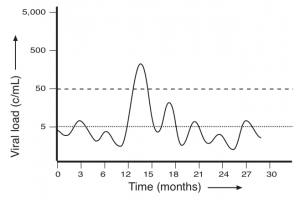 A single blip above 50 is common. It doesn’t mean you need to change treatment.

A blip is usually undetectable again on the confirmatory test.