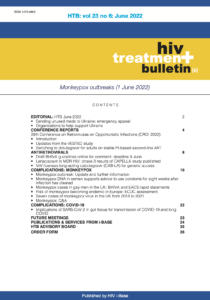 This issue of HTB includes several articles on different aspects of the current monkeypox (MPX) outbreak.

This is important for HTB because the recent outbreak has included a high proportion of cases in people living with HIV.

During the last few weeks, early cases have developed into over 900 cases globally, including more than 35 counties where MPX is not endemic.

As of 1 June, cases are predominately in, or associated with, capital cities with over 200 cases in the UK, 135 in Spain and 100 in Portugal.

Nearly all cases are so far in men, the majority being gay or bisexual men

The UK-SHA has published several resources on management and control of cases, including medical management and contact tracing, largely through sexual health clinics. BHIVA issued an early statement, already updated, EACS/ECDC hosted two open webinars and WHO, IAS and the US CDC have hosted similar events.

Good management of MPX includes providing clear and accurate information that informs people at highest risk on the importance of self-awareness of symptoms. These are most commonly fever and fatigue, followed by distinctive blisters, that ulcerate and then scab. Cases are infectious from first symptoms until the scab are all resolved. But condoms are currently recommended for eight weeks after the infection is cleared, in case sexual fluids prove to be a reservoir site that takes longer to clear.

Most cases are mild and self-managed at home without treatment but in isolation, including from pets. Contact tracing is being used to limit further risk and spread.

This is complicated by the need to accurately informing gay and bisexual men without adding to discrimination and having to do this while still in the shadow of COVID-19.

We therefore include articles and linked resources to cover MPX in more detail.