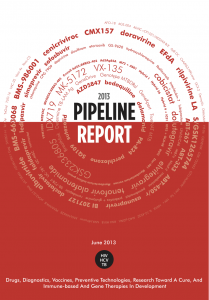 The 2013 pipeline report was launched on 30 June 2013 at the International AIDS Conference in Kuala Lumpur and is now published online.

This annual i-Base/TAG report covers research into treatments and diagnostics that are the most advanced in development.

i-Base/TAG have a separate website for this report. This site will be updated throughout the year and it also includes archives of previous reports from the last 12 years.

HIV i-Base/Treatment Action Group 2013 Pipeline Report
calls on leaders to get the best HIV, hepatitis C virus (HCV), and tuberculosis drugs, diagnostics, and vaccines to the most people as quickly as possible

KUALA LUMPUR, Malaysia, 30 June 2013 – HIV i-Base and Treatment Action Group (TAG) called on global and national leaders, research sponsors, and regulatory authorities to work together to make the best HIV, HCV, and TB drugs, diagnostics, and vaccines accessible as fast as possible, according to a report released today at the 7th International AIDS Society (IAS) Conference on HIV Pathogenesis, Treatment and Prevention in Kuala Lumpur, Malaysia.

In the 2013 Pipeline Report, Polly Clayden of HIV i-Base (UK) and Mark Harrington of TAG (USA), set a seven-part agenda to speed the best medical products to all who need them everywhere. They call for research funders to continue investing in better products and to address global needs up front in their development. They demand that regulators expedite review of new medications in developing countries and close approval gaps between rich and poor countries and adult and pediatric indications. World Health Organization (WHO) and national guidelines groups must continue streamlining and simplifying treatment guidelines, they stress. Clayden and Harrington urge authorities in developing and developed countries to speed the rational use of the best possible drug combinations regardless of patent status or manufacturer and to expedite the transition to high-quality first-line generic products when preferred drugs go off patent.

Noting that the pharmaceutical industry has made billions from successful HIV therapies in the past two decades, Clayden and Harrington report that in the last decade alone, 47 new drugs and combinations were studied in phases II and III. An impressive 34 percent (16/49) were approved by the U.S. Food and Drug Administration (FDA), with 6.4 percent (3) awaiting approval and 21 percent (10) moving forward in phases II or III. “To get the best drugs to the most people as quickly as possible, global and national health leaders, regulators, and research sponsors must take concerted action to speed up the approval of pediatric, generic, and high-quality cross-sponsor fixed-dose combinations—as soon as they are available in rich countries—in those where they are needed most,” commented Clayden and Harrington.

Themes of the 2013 “Antiretroviral Pipeline” by Simon Collins (HIV i-Base) and Tim Horn (TAG) include the continuing wave of innovations bringing broader, and in some cases better, treatment options for people with HIV. They note “the possible conflicts these innovations will encounter due to global economic austerity.” Collins and Horn underscore “the potential for combining generic antiretrovirals as they move off-patent in many developed countries with innovator compounds to produce synergistic, often cross-sponsor, combinations and fixed-dose combinations (FDCs) that could offer people with HIV the best of the new and the old while saving cash-strapped health systems billions of dollars.”

Noting the current decade’s coming wave of patent expiries on first-line HIV drugs such as efavirenz and tenofovir, Collins and Horn note that, “savings from generics are essential if we are to retain public health services for those who remain uninsured or underinsured.” They call for generic manufacturers and governments to seize the opportunity posed by the coming wave of patent expiries to offer optimal combinations at prices much lower than for innovator compounds. It will be critical for rich and poor countries, to reinvest the savings generated by sensible use of generic-containing antiretroviral combinations into massively expanded HIV prevention and treatment programs to end HIV transmission and progression to AIDS and death and achieve an “AIDS-free generation” for everyone.

In back-to-back chapters on pediatric HIV drugs and HIV treatment optimization, Polly Clayden calls for continued streamlining and rationalisation of adult and pediatric HIV formulations and notes innovative partnerships such as those recently supported by the Drugs for Neglected Diseases Initiative (DNDi) and UNITAID to expedite production of optimized regimens for children. Clayden stresses the importance of developing generic combinations with the best target product profiles. “It’s time to move on from merely providing the world’s poor people with the cheapest medicines and time to give them the best – safest and most effective – treatments possible, and make them affordable” says Clayden.

Richard Jefferys (TAG), in his broad survey of research developments on preventive technologies, research toward a cure, and immune-based and gene therapies, calls for intensified basic and translational science on potential HIV vaccines and continued research on antiretroviral (ART)-based pre- and postexposure prophylaxis (PrEP, PEP). He stresses the need for immune-based therapy research to raise CD4 T cell counts among immunologic nonresponders to HIV therapy, and new research to address ongoing residual dysfunction of the immune system that persists in people on successful ART. Finally, Jefferys emphasizes further investigation of the role of very early treatment with potent ART combinations in infants and adults infected with HIV; better lab measurements to quantify the cells and tissue sources of the latent HIV-1-infected cell reservoir, the target for HIV cure research; and exploration of the potential contribution of therapeutic vaccine approaches as part of combination curative therapy.

In the 2013 “HCV Treatment Pipeline,” Tracy Swan (TAG) notes that the “confluence of a robust HCV drug pipeline, shortened regimens, and [shorter] posttreatment follow-up are extraordinary. The new FDA breakthrough therapy designation may speed things up as well. By the end of 2014, [new HCV drugs] from four different classes and fixed-dose combinations (FDCs) are likely to be approved by the U.S. Food and Drug Administration (FDA) and the European Medicines Agency (EMA), offering the potential for off-label mixing and matching.” An impressive 26 new HCV drugs are being studied in phases II/III in at least 28 interferon-free regimens, which are bringing the potential of faster, all-oral HCV cures rapidly toward approval for the world’s 185 million people living with HCV.

Swan notes, however, that not all optimal combinations are being studied, with some sponsors preferring combinations of their own proprietary compounds, while many sponsors take too long to study their new drugs in people coinfected with HIV and HCV, and those with cirrhosis.

In her companion chapter, “Low- and Middle-Income Countries Defuse Hepatitis C, the ‘Viral Time Bomb,’” Karyn Kaplan (TAG) describes how a worldwide movement is forming to ensure that when new all-oral HCV cures are approved, that governments, health systems, and providers will be ready for them. Kaplan points to recent progress instigated by HCV activists in countries such as Egypt, Georgia, Thailand, and Ukraine.

In three chapters on tuberculosis (TB) diagnostics, treatment, and vaccine research, Colleen Daniels, Erica Lessem, and Mike Frick (TAG) find that lack of investment and political will make the TB pipeline the most anemic covered in the 2013 Pipeline Report.

Globally, one-third of active TB cases are never diagnosed, reported, or treated, meaning that 3 million people are walking around with undiagnosed disease, in danger of progression, death, and onward transmission.

Some progress has been made in rolling out new DNA tests, which can detect TB more rapidly. The tests still require high-tech laboratory equipment, electricity, and trained personnel though, meaning they are far from the majority of TB patients and those at risk. Manufacturers are trying out cheaper forms of DNA TB diagnostic testing with as yet little published data, and faster ways to detect TB mutations, which are associated with resistance to TB medications.

TB treatment is slowly moving forward following the first FDA approval of a new drug from a new class in over 40 years, and innovative combination TB studies under way for both drug-sensitive and drug-resistant disease. Most countries are not ready to review, approve, distribute, and assure rational use of new TB drugs and combinations, however, reinforcing HIV i-Base and TAG’s call for high-burden countries to modernize their regulatory research oversight and approval programs.

Research on TB vaccines remains slow and underfunded but there are some glimmers of hope, particularly on the basic science and early clinical front. Much more investment is needed in TB research and development overall, and in TB program scale-up to ensure access to the best diagnostics tests and preventive and curative therapies.

About HIV i-Base – HIV i-Base is a London-based HIV treatment activist organization. HIV i-Base works in the United Kingdom and internationally to ensure that people living with HIV are actively engaged in their own treatment and medical care and are included in policy discussions about HIV treatment recommendations and access.

About TAG – Treatment Action Group (TAG) is an independent AIDS research and policy think tank fighting for better treatment, a vaccine, and a cure for AIDS. TAG works to ensure that all people with HIV receive lifesaving treatment, care, and information. We are science- based treatment activists working to expand and accelerate vital research and effective community engagement with research and policy institutions. TAG catalyzes open collective action by all affected communities, scientists, and policy makers to end AIDS. TAG is a nonprofit, tax-exempt 501(c)(3) organization.