One of the first oral sessions of the conference included several presentations that should generate excited discussions.

The first of these is for a new approach to an immune-based treatment called SB-728. 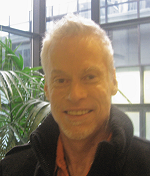 Matt Sharp, US activist and participant in SB-728 study

Before anything else, it is important to recognise that these are first reports in a tiny group of people – in this case, five HIV-positive men, including the leading US treatment activist Matt Sharp. These were men who had been HIV-positive for 20-30 years. All were successfully on treatment with undetectable viral load, but their CD4 count remained between 200-500 cells/mm3, which technically means it has not ‘normalised’.

The treatment involved having blood taken – similar to donating blood. This sample was then treated to remove unwanted cells and the remaining CD4 cells were treated with gene therapy based on zinc finger nuclease (ZFN) to make cells that were now resistant to HIV infection. This was done by disrupting the CCR5 gene, which many studies have shown directly relate to protection from HIV (for example if you have the delta-32 genetic deletion).

The genetically modified cells were then expanded in number and frozen to store and transport them back to the clinic. Then each set of cells were reinfused to the individual donor in a dose or either 10 or 20 billion cells. The reinfusion process took about 10 minutes.

This lead to average CD4 count increases of approximately +200 cells/mm3 in five of the six volunteers. One person did not respond to treatment and the presentation suggested that the process may be less effective below a lower CD4 threshold.

The treatment only affects about 25% of treated cells, which when reinfused resulted in approximately 3-6% of cells remaining CCR5-gene deficient three months after the reinfusion. Although longer term results are limited, CD4 responses were maintained out to a year in people with this length of follow-up.

Side effects were reported but they were minimal, mainly related to mild flu-like symptoms in the few days after after the reinfusion. Similar short-term ‘garlic body odour’ was reported, thought to be related to one of the compounds used in the cell freezing process.

In summary, these results are exciting because no current treatment has been produced that effectively increases CD4 cells independently from the impact of antiretroviral treatment. Up to 10% of people on treatment are estimated to control viral load successfully but have a more limited benefit on their CD4 count. Previous treatments, such as IL-2, were associated with difficult side-effects and unlikely functional benefit from the CD4 increases it generated.

However, this is a single arm study with no control group. Without an analysis of functional immune changes it is not possible to determine whether the CD4 infusion or the gene-modification was responsible for the impact on CD4 counts, and the degree to which these changes are likely to have a clinical benefit.

Although in the background information to these studies, Sangamo Biosciences, the company developing SB-728, refers to the Berlin patient with leukemia who had a stem cell transplant from a donor with CCR5-delta 32 deleted immune cells, and who has since been called the first person to be cured of HIV, SB-728 is a very different process. Only a small percentage of a persons CD4 cells are modified with the SB-728 approach. There is no suggestion that any of these volunteers should think of interrupting treatment.

This procedure produces a reservoir of cells that are resistant to HIV infection, it is not replacing the entire pool of CD4 cells which happened to the stem cell transplant patient. The results though are tantalising and an exciting way to begin the conference.

Matt Sharp was one of the patients who responded successfully to treatment. He found the procedure easy and painless, with minimal side effects. Having had a CD4 response that is now 200 cells/mm3 higher than a year ago, he is optimistic about the results and anecdotally believes the new cells are functional as he has noticed fewer low level HIV-related complications over the last year. “From an activist perspective, it is important that people participating in this research have the option to continue to access this technology, as it continues in future studies”.

Thanks to Matt Sharp for sharing his personal experiences as a participant in this research.

One of the first oral presentations of the conference reported results from an immune-based treatment from Sangamo Biosciences called SB-728 presented by Jay Lalezari from Quest Clinical Research in San Francisco. [1]

The intervention in people who were successfully treated with HAART but whose CD4 count remained between 200 and 500 cells/mm3 led to increases in CD4 cell counts of approximately 200 cells/mm3 that were sustained for a year.

In this study, the modification process affected a mean 26% of cells (14 to 36%) prior to reinfusion. The percentage of CCR5 disruption in the peripheral blood 14 days after reinfusion in five participants was 6, 3, 1, 2, and 2% and this persisted for the duration of follow up. CD4 counts increased in all participants (+35 to +1038 cells/mm3 at day 14). Mean follow up was 24 weeks and 4 weeks, in the low and high dose groups, respectively, with mean CD4 increases in these five people of 208, 86, 233, 911 and 210 cells/mm3. Although increased CD4 counts could be related to increased cellular transport, rectal tissue biopsies indicated that reinfused cells reached other tissue compartments. Infusion of both doses was safe and well tolerated with mild flu-like cytokine release-related side-effects immediately following the infusion, and garlic body odour related to one of the compounds used in the freezing process.

These results suggest that ZFN-modified gene disruption of CCR5 provides a feasible approach to generate a reservoir of HIV-resistant cells. Three new patients will receive 30 billion cells as a third cohort, two of whom have already received treatment.

A second presentation reported research into a developing a similar disruption to CXCR4 virus that was able to shift tropism in a humanised mouse study suggesting that genetic manipulation may be able to be designed for people at all stages of HIV disease. [2]

The research was also the focus of two presentations in a symposium on the last day of the conference called Obstacles to a Cure. [3]

Using an immune-depleted (NSG) mouse model allowed the researchers to transplant human cells grafted at day one and then analyse human cells after 2-3 months. At this time, 65% of the mouse bone cells are human origin, 80% of thymus cells, and 20-30% bone cells. The humanised mice were then infected with HIV and their viral infection was monitored over several months. While control mice showed expected CD4 declines, ZFN-treated mice maintained immune equilibrium. These differences were more striking when looking at tissue samples with severe cell depletion in bone marrow, thymus, spleen and gut mucosa in control mice (receiving untreated HSC) compared to ZFN-treated mice, who showed similar response to HIV uninfected and untreated control mice.

CCR5 expression in spleen and gut cells were only detected in the control HSC mice and not in the ZFN-HSC animals. Intriguingly, viral load curves were similar between the treated and untreated infected animals for the first six weeks, rising to >100,000 copies/mL. They remained at this level in the untreated mice but dropped to undetectable levels in both blood and tissues of the treated mice. Similar response were observed with other R5-tropic but not X4-tropic strains of HIV.

The group is now looking at additional gene deletions for CCR5 including developing responses resistant to X4 infection.

Scale up of this technology is starting with HIV-positive people diagnosed with AIDS-related lymphoma, including EBV-related lymphoma. Treatment included removing and treating HSC prior to chemotherapy and reinfusing after chemotherapy. Endpoints include immunologic and virological endpoints. This complements the SB-728 treated CD4 cells in phase 1 studies reported below.

Carl June and colleagues from University of Pennsylvania presented combined early in vivo results from the Lalezari study reported above and from patients enrolled in second phase 1 open label study being run by Pablo Tebas at University of Pennsilvania. This second study uses single dose infusions of between 5–10 billion cells in 12 people on stable antiretrovirals: 6 with CD4 >450 (6 enrolled, 4 infused, 2 on treatment interruptions, 1 with data from July 2009) and 6 with <500 cells/mm3 (4 enrolled, 2 infused). This study also includes an ‘optional’ treatment interruption once month after the infusion.

Of 14 people treated, 9 have safety data. No serious events have been reported over median of 232 days (range 99–754 post infusion); 58 events were reported (48 mild, 10 moderate); 33/58 were judged related to infusion (fever, fatigue) and resolved without complications within 48 hours. No evidence was seen of genotoxicty.

All patients have an early CD4 increase post infusion of 200–300 cells by day 14, with three people have greater than 1000 cell increases, with most people dropping to or stabilising to around +200 after 3 months. The CD4:CD8 ratio normalised to >1.0 in most patients out to 90 days. However in these small numbers there were a range of responses and no all patients responded as strongly.

All patients but one maintained a level of approximately 4% of modified cells that were maintained and stable out to 6 months. The patient with longest follow-up has maintained a stable level of modified cells for over 400 days and is evidence that memory cells with stable persistence can be modified (though there are no phenotypic data on these cells yet). In vivo expansion of the modified cells was seen in 8/9 patients (mean 3-fold increase 14-30 days post infusion, but 2 people having 20–40 fold increases) with stable increases persisting for the extent of follow-up. Trafficking to other cellar tissue was demonstrated form rectal biopsy samples showing increases gene disrupted cells at least on a comparable level to that seen in blood.

The two patients who took a 12-week treatment interruption at day 28 experienced viral rebound to around 5 logs which then dropped by 1–2 logs prior to restarting treatment but larger patients numbers are needed to evaluate any consistent pattern or treatment effect.

Currently this research is exciting. Up to 10% of people who respond virologically may fail to generate a similar or sufficient immunological response to HAART, and delayed initiation of HAART correlates to reduced likelihood of normalising CD4 counts (commonly referred to as >500 cells/mm3). IL-2-associated CD4 increases either failed to produce functional immune benefits or these were offset by the toxicity associated with IL-2 treatment.

This genetic approach is different to the stem cell transplantation from a CCR5-delta 32 deleted donor if a patients who was able to discontinue antiretroviral drugs for over three years without experiencing viral rebound, even though the publicity about this research linked them together.