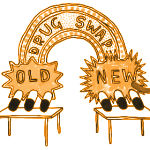 Some symptoms in the first few weeks of treatment may be caused by immune stimulation or your body getting better. So what you think might be side effects might not be related to the drugs at all.

If your initial symptoms are only mild or moderate, seeing whether they settle down before changing treatment, can be good advice. Some side effects become much easier after the first few days and weeks of treatment.

If side effects are more serious or difficult it is easy to switch drugs.

Changing to another treatment will not affect your future options.

The decision to change treatment in order to manage side effects will depend on:

A new version of TDF called TAF is likely to become more widely used in the next few years.

So long as you haven’t developed resistance to other nukes, you can switch one for another. The exceptions are:

Although efavirenz is no longer a preferred drug for starting treatment it is still widely used.

Efavirenz is linked to mood disturbance, disturbed sleep patterns and vivid dreams (called CNS side effects) when starting and more rarely in the long term.

Two newer NNRTIs are alternatives to efavirenz: rilpivirine and etravirine.

You should be able to switch from efavirenz to one of these alternatives without stopping treatment or changing your other drugs.

Rilpivirine (Edurant) still can have CNS side effects, but at only at half the rate compared to efavirenz. Rilpivirine needs to be taken with food.

The brand name for rilpivirine in a single pill combination with TDF/FTC is Eviplera (Complera in the US) and with TAF/FTC is Odefsey.

Etravirine (Intelence) is an NNRTI that does not cause CNS side effects that can be used instead of efavirenz.

Although the NNRTI nevirapine used to be widely used, it is no longer used either when starting or swiching treatment. People already taking nevirapine without problems do not need to change drugs.

Switching from one protease inhibitor (PI) to another is also straight-forward. Only two PI are still widely used: darunavir and atazanavir.

Both these PIs usually are boosted by either ritonavir (/r) or cobicistat (/c). Sometimes these booster drugs cause side effects and so switching to another drug class is worth trying.

Sometimes a higher dose of atazanavir (400 mg) can be used without boosting. If you want to do this, drug levels need to be checked (see page 19).

If you are currently using older PIs then changing to one of these newer drugs is usually a good idea.

It is also likely to be okay to switch between different integrase inhibitors so long as you viral load in undetectable and  you dont have resistnce to these drugs.

For people with early resistance to raltegravir or elvitegravir, it is sometimes possivle to switch to dolutegravir.

It is also easy to switch between different type of HIV drugs.

For example, people who have difficulty taking efavirenz often switch this NNRTI to a PI or an integrase inhibitor.

Similarly, people who have trouble with a protease inhibitor can often switch to an NNRTI or an integrase inhibitor.

Other classes of drugs

New drugs in development will also hopefully have fewer side effects.

As each new drug becomes more widely used, they will probably be used as switch options.

Each choice will be based on your individual treatment history.

It might also depend on how the drug is licensed, on drug cost, and on which clinic you attend. If it is important to get access to a new drug, it might be worth changing your clinic.