In this section we describe the main HIV tests.

More details about how the tests work and the science behind them is included in Appendix 3.

The most common HIV test is an antibody test.

Antibodies are part of your immune system that are produced when you come into contact with an infection. Antibody tests look for this immune response.

These tests can be finger-prick tests or use blood samples sent to a laboratory.

If this result is negative or non-reactive, then you are HIV negative.

If the result is positive this does not mean that you definitely have HIV, although it is likely. A small percentage of people can have a ‘false-positive’ result.

All positive results need to be confirmed by a second test.

HIV antibody tests do not work as soon as you are infected because it usually takes four weeks for your body to generate antibodies to HIV. The time between infection and when your body makes antibodies is called the ‘window period’.

Most people generate an antibody response within 4 weeks, but occasionally it can take longer. This is why people are advised to wait three months to take an HIV test, or to re-test three months after an earlier negative result.

Taking an antibody test less than 4 weeks after exposure will not tell you very much.

It is now common for antibody tests to also test for antigens. These are called 4th generation tests or combined antibody/antigen (Ag/Ab) tests.

In these tests the antigen being tested is a major HIV protein called p24.

p24 (short for protein 24) is produced 2–3 weeks after infection and before antibodies are produced. p24 levels are only detectable for the next 1–2 months. However, by the time the p24 levels have dropped antibodies will be present.

The UK recommends a single test six weeks after exposure. A negative test after four weeks needs to be confirmed by a second test after three months. Antibody-only tests take about two weeks longer to get these results.

PCR stands for Polymerase Chain Reaction. This test looks directly for HIV in blood. It has the shortest potential window period and can be used from 3 days to 4 weeks after an exposure.

Viral load tests are not recommended for HIV testing except in specific circumstances. This is because they are less accurate. They are also more expensive and take longer to get a result.

After infection, viral load is usually very high within the first 4 weeks and so this test can be used to confirm a suspected early infection if someone has symptoms.

However, some people have undetectable viral load without treatment, so a negative result does not guarantee that you do not have the virus.

In adults, viral load tests are only usually offered when there is both:

As a baby has the mother’s antibodies for the first 18 months, antibody testing is not used until a child is two years old.

Which test is which?

Figure 11 lists commonly used HIV tests and shows what type of test they are.

Your testing centre should tell you this information for the test that they use.

Sometimes testing centres give the tests explained above different names like ‘ELISA’ or ‘Western blot’ without explaining what kind of test they are and what it is they are looking for.

Ask your clinic for more detailed information about the type of test that they use. 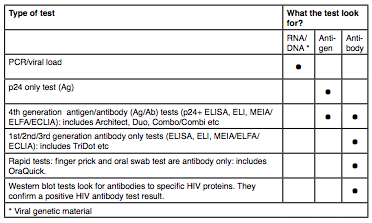 When can each test be used?

Viral load can sometimes be detected within a week, p24 on average by day 16 and antibodies by day 25. However, these are average results a lot of people take longer.

A test that misses half of infections is not very useful.

So a 4th generation antigen/antibody test is recommend four weeks after exposure because it will detect 95% of infections.

Validating the timing of viral load (RNA), p24 and antibodies is difficult. Tests can only be checked against blood samples from the same people before and after infection. These are usually people who regularly donate blood (usually twice a week).

Some of these people catch HIV without knowing it. When this picked up in blood screening, these samples are used for testing new HIV tests.

This is why it is impossible to give the percentage chance that a test will be accurate for each day. The tests have been checked on a limited number of samples. These sample reflect the large range of individual responses.

On average, viral load tests (PCR RNA) with a cut-off of 50 copies/mL detect infection about 7 days before a p24 antigen test and 12 days before an antibody test.

These relative times are only used when comparing new tests. They are not good at setting an absolute cut off at 14 days or 19 or 41 days etc.

Figure 13 shows the time ranges after an exposure. Very rarely an antibody response may take longer. Even more rarely (less than 1 in a million) an infection may not make antibodies. These people have positive viral RNA and DNA.