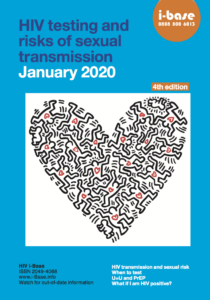 Over the last few years, and for the first time in 15 years, HIV rates in the UK and many other countries have started to drop.

This is partly because people are testing more often and being diagnosed and treated earlier. It is also because PrEP is now much more widely used.

But knowing how to protect your sexual health is still very important – whether you are HIV positive or HIV negative.This booklet is about sexual transmission of HIV and HIV testing. 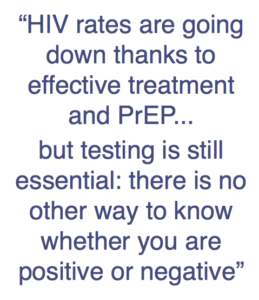 It includes information on:

This guide is written for people who want to have sex.

This booklet is focused on different risks for transmission and on ways to stay HIV negative.

But sex is complicated. Even when being careful, some people will still become HIV positive.

If this happens, there is little to gain from looking back. HIV treatment (called ART) is very effective.

If you are HIV positive, i-Base and other organisations can help.

Changes to the fourth edition

Since the previous edition there have been major advances in relation to HIV prevention.

Firstly, there is now more evidence that ART stops HIV, even if you don’t use condoms. Most HIV positive people are now diagnosed and are on ART.

PrEP is when an HIV negative person uses HIV drugs to prevent infection. When used correctly PrEP reduces the risk of transmission by more than 99%.

Thirdly, several major campaigns have been launched to reduce new infections – and also to reduce fear and stigma of HIV.

Several sections in the guide reflect this new evidence.