What is the window period for an HIV test?

What is the window period?

The window period is time between HIV infection and the point when a test will give an accurate result. Different types of tests have different window periods.

During the window period a person can have HIV and be very infectious but still test HIV negative.

UK guidelines recommend a window period of six weeks for a 4th generation antigen/antibody test. By this time 99% of infections will be detected (see Figure 7). Testing after only four weeks will detect 95% of infections.

A negative result at 6 weeks with a 4th generation test does not need to be confirmed.

A negative result from testing earlier, for example after four weeks, needs to be confirmed by a second later test.

The earliest marker is HIV viral load. This is in the first weeks after infection (usually from 1 to 6 weeks after exposure). A high viral load is related to seroconversion symptoms.

The first HIV protein (antigen) that can be measured is p24 (from 1 to 8 weeks after exposure).

Viral load and p24 tests are not accurate for diagnosing early HIV if the results are negative.

An HIV antibody response can be detected as early as two weeks in a few people and in more than 99.9% of people by 12 weeks. An antibody test at 4 weeks will detect 95% of infections.

Antibody testing at 4 weeks can give you a good indication of your HIV status, but you need a test at 12 weeks after the exposure to be considered HIV negative. 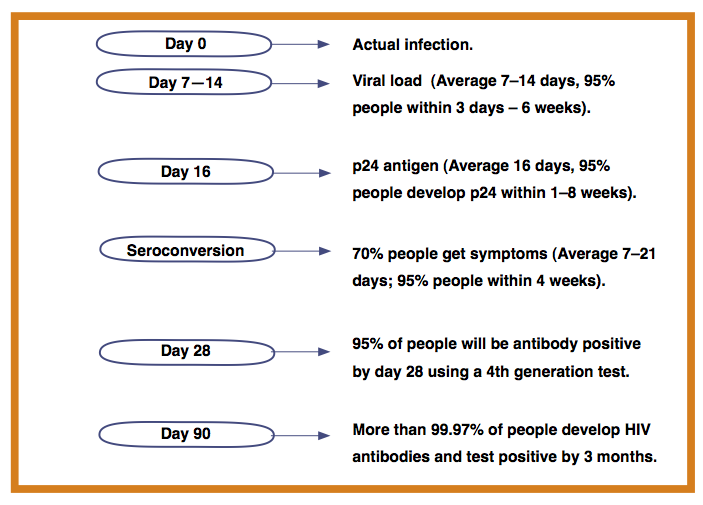 * Both these graphics need to be updated to also show the six week time point.