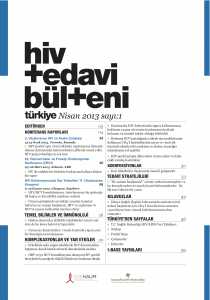 This bulletin is published In April, August and December each year.

PDF files from earlier editions are included below.

Based on the i-Base publication HTB, it will be published three times a year and distributed in hard-copy and electronic versions to all HIV-treating doctors, clinics and patient groups in Turkey and to Turkish-speaking doctors in the surrounding regions.

It is a project of Ege University HIV/AIDS Practice and Research Centre (EGEHAUM, www.egehaum.com) and its director, Dr Deniz Gökengin, in collaboration with HIV i-Base and International HIV Partnerships (IHIVP, www.ihivp.org), a UK/US-based resource consultancy which works with HIV stakeholders to develop effective responses to HIV and related conditions.

New editions can also be downloaded from the university website.