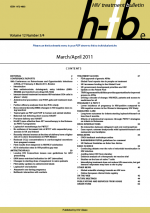 The March/April issue of HTB is now online.

This issue leads with reports from the 18th Conference on Retroviruses and Opportunistic Infections (CROI).

We also cover the proposed guidelines issued by the London HIV Consortium on prescribing antiretroviral treatment in London clinics for 2011.

The London guidelines are likely to be controversial given the decision to prescribe Kivexa-based combinations as preferred first-line treatment for naïve patients, when it is clinically appropriate, based on the reduced cost compared to Truvada-based combinations, including Atripla.

This has given cost-based prescribing an elevated profile, though it has been a reality for many years. The higher price for raltegravir is directly related to the limited indications for when it is is used. The London Consortium will include a safety audit from this change of policy which will need to demonstrate that patient safety has not been compromised by the changes.

The clinical guidelines were supported by an advisory panel that included leading doctors from all London hospitals. The changes were less radical than many people expected given the cost pressures facing all NHS departments. In this they minimise changes for people currently on stable treatment.

Wider public responses to these changes have so far been limited.

The London Consortium had still to post any official documents about the policy change online as we went to press. This will need to include the guidelines and the evidence base that support any changes. Please check the following link for details.