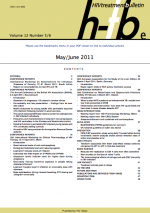 This edition of HTB might be appropriately tagged The Conference Issue as it includes reports from five meetings covering a wide range of treatment issues.

We lead with a report from a workshop held in South Africa in March, that reviews research into nanoformulations of antiretrovirals and whether there is the potential to improve on current formulations.

Reports from the annual BHIVA meeting focus on UK standards of care and new research.

The BHIVA audit of HIV care in immigration removal centres focuses on the shocking treatment of people who have lost their case to remain in the UK, that is a national shame.

Other reports look at the use of atazanavir during pregnancy, the ageing HIV population in the UK, the transition from paediatric to adult HIV care, and a new way to monitor bone mineral density.

The complexities of current and pipeline drugs are highlighted in reports from this year’s pharmacology workshop, which had one of the strongest programmes for several years.

Atazanavir features in several reports including dosing during pregnancy and an intriguing review from leading HIV pharmacologist Courtney Fletcher suggesting that using 50 mg or ritonavir, rather than 100mg, may achieve a similar boosting impact. This has been a focus of community speculation since ritaonavir was initially used universally and produced at 100 mg doses.

We include a rapid report on HCV research from Jules Levin from the principal European liver conference (EASL) with links to NATAP’s online reports. The treatment pipeline for hepatitis C is at a similar point today that the HIV pipeline was at in 1996, with the potential to revolutionise management within a few years – even though data on people living with HIV and HCV coinfection is still sparse.

Finally we continue with reports from CROI earlier in the year that as usual has so much to report that we include articles in several issues.

There are also of course additional journal reviews and basic science reports to keep you up-to-date in other news. Happy summer reading.