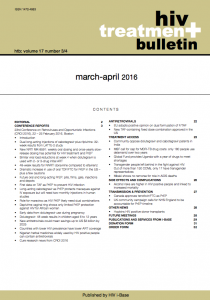 The latest issue of HTB is now online.

Packed with leading news from CROI 2016 – the most important annual scientific HIV conference.

Dozens of studies on PrEP – both current and future options – many of which could completely change the way PrEP is used.

We include reports on some exciting new HIV drugs, including for children, with compounds in early stages of research –  plus first reports on treatment access.

Plus stop-press news that NHS England has just blocked the process for UK access to PrEP.