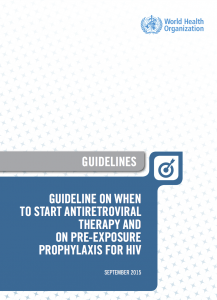 This article is also included in the September/October issue of HTB.
https://i-base.info/htb/28949

Both recommendations are also controversial in being aspirational goals to drive access to both ART and PrEP, which is still very limited for many people and in many countries.

In practice, the limited access to both ART and PrEP means that this ideal is unlikely to be immediately achieved in any country, however well resourced.

Both changes, together with the publicity that the news will generate, are also likely to contribute to both reducing late and undiagnosed HIV and to normalise HIV by reducing stigma and fear that currently remain high.

UK guidelines released this week, already include the recommendation for all HIV positive people to be treated, including at higher CD4 counts.

WHO-approved generic formulations of PrEP are easy to buy online at greatly reduced prices compared to the current in-patent version used for HIV treatment. It is legal in the UK to buy online medication for personal use (defined as a three month supply). A recent Q7A on the i-Base website includes further information. [4]

These sites are increasingly being used by people in the UK. This shows the importance for the NHS to provide a setting where the essential monitoring can be easily provided.