This is a pre-press article for the November/December edition of HTB.

Serious vision loss linked to recreational use of poppers has been reported as a case study in this weeks issue of the Lancet. The vision changes have not resolved after six months. 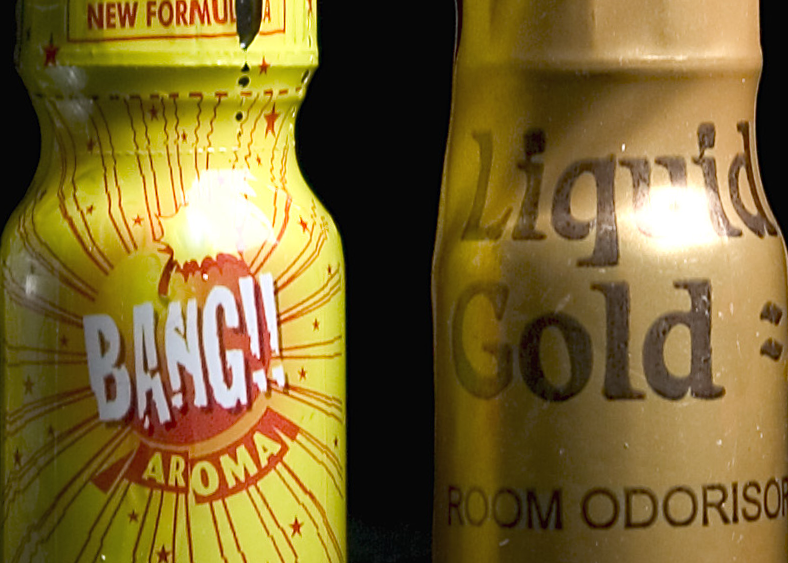 Two brands of poppers out of many that are currently available over the counter for between £4 to £8.

Anna M Gruener and colleagues from Guy’s and St Thomas’ NHS Foundation Trust and Queen Mary’s Hospital, Sidcup published a case of maculopathy associated with use of poppers in the 1st November 2014 edition of the Lancet.

This case involved a 30 year old man with no ocular history who presented with bilateral central vision loss following inhalation of poppers. Visual acuity was 6/12 in the right eye and 6/18 in the left eye.

Neither visual acuity nor examination findings have resolved despite no further use of poppers for six months.

The report notes that other cases of poppers maculopathy have been reported since legislation in 2006 led to isopropyl nitrite being changed to isobutyl nitrite. The report notes that the mechanism for poppers to damage central photoreceptors is unknown, but that there is a clear cause-effect relationship, and that reports are increasing.

The authors note that the risk of damage is potentially serious and irreversible.

Poppers is the common name for a stimulant commonly branded as a room odouriser but which is inhaled as a recreational drug to enhance dancing or sex, or both.

Details on the estimated exposure to poppers that prompted these symptoms or previous history of use are not included.

One of the purposes of a case study is to highlight previous unknown or underestimated serious events. This should prompt further research that might be able to evaluated how common this might be.

People using poppers, even with no previous history of eye problems should be aware that this is a potential risk. I also raise concerns for sub-clinical damage that may not be reported but might have longer term consequences.

Further details may be available for the print edition of this report.