Guidelines for London prescribing of antiretroviral drugs in 2011 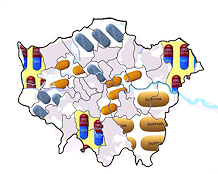 The London HIV Consortium, the pan-London commissioning group for HIV services, has just outlined the results of the tender process for purchasing HIV drugs for the next two years. This is part of an ongoing process to manage the HIV budget within government-imposed restriction on NHS budgets. Over two years the group is faced with having to make savings of approximately £10 million to the HIV budget to defer a budget that has not increased in line with inflation.

This will change the way that some HIV drugs will be prescribed in London. Although there are circumstances where the choice of when to use each drug has changed, all drugs will still be available for different situations.

The main changes are:

This policy for broadly influencing prescription practice has been part of London drug commissioning for many years.

The details of these changes are explained below.

Cost is the principal reason behind the changes. Widespread cuts across the NHS include nearly all services. HIV is no different to any other service in this respect. Prescribing the most cost effective treatment first will help protect other aspects of HIV services. HIV treatment is also very individual. Treatment will continue to be individualised for each person’s circumstances.

This year the Consortium changed the process of purchasing drugs. This required drug manufacturing companies to tender bids for the costs of their drugs for a range of clinical settings, for example for first-line therapy or for first treatment failure etc. This has taken several months. It has involved input from doctors from the leading HIV hospitals, pharmacists and community advocates.

The tender included the option for a sliding scale of costs if larger quantities are used.

The principles for this process are important:

All manufacturers had the opportunity to modify aspects of their bids to standardise them with other aspects of the tender process, especially in relation to the staggered price related to the volume of drugs purchased.

These budget estimates are dependent on reaching projected target volumes for each drug, including maintaining current drugs levels for some existing drugs. In order to reach or maintain these targets over the year, every London clinic will be working to the same guidelines. Although a clinic can prescribed outside these guidelines the drug costs for those patients will not be reimbursed by the London HIV Consortium.

HIV care has to be managed and maintained under the financial constraints being imposed on the NHS. This has to be done without jeopardising patient care and these guidelines have the potential to improve patient care in many cases.

An audit process with closely track the outcomes from key treatment changes, initially at three-monthly intervals, to confirm that safety and efficacy is maintained.

These recommendations broadly fall within the BHIVA guidelines (though these have not been significantly revised since 2008), including the importance of cost effectiveness when clinical data support several therapeutic choices.

HIV care remains one of the most cost-effective medical interventions. These proposed guidelines manage to minimise disruptions to patient care, maintain broad access to high quality drugs and retain flexibility for individualised care.

Although this tender is for two years the clinical guidelines will be reviewed and changed if new research raises concerns about the clinical use of any of the preferred drugs.

What this means in practice

When there are clinical reasons not to use any of these drugs, alternatives can of course be used. This includes drug resistance, concern for side effects, shift work, pregnancy, high viral load (over 100,000 for abacavir) or high risk of heart disease (a greater than 10% risk over ten years, again for abacavir). If abacavir/3TC is not appropriate tenofovir/FTC is recommended.

a) Atazanavir/r is recommended as the first choice if efavirenz or nevirapine are not appropriate.

c) Other drugs can be used when there is a clinical need. For example, if you have difficulties with atazanavir, you can use alternative protease inhibitors.

This main change for people starting treatment is that there will be more people using two pills a day rather than one. First-line treatment will still use once-daily combinations and number of daily doses is probably more important than daily pill count. All the recommended combinations are already widely used.

In practice this should not be a significant problem for most people. Most people prefer once drug to two, but there are few studies that show it makes a difference to adherence or to clinical results. While the ease of use of single-pill formulations are popular, there are little data suggesting that one vs two pills daily has a poorer clinical outcome.

When there are clinical reasons to use alternatives, these will still be used. Common reasons not to use abacavir/3TC includes a higher risk of heart disease and a higher viral load when starting treatment. For a few people this might also include higher lipids as tenofovir/FTC has a better lipid profile than abacavir/3TC.

Atazanavir/r is already a widely used, once-daily protease inhibitor that is generally easy to tolerate and easy to modify in case of side effects. This has the potential to improve combinations, for example for people currently taking twice-daily protease inhibitors. Switching to alternatives, including back to the original treatment is possible at all stages if this is needed.

The commissioners already influence drug prescribing. C>urrently there are financial incentives for clinics to start at least 85% of new patients on NNRTI-based combinations (using DoH Commissioning for Quality and Innovations (CQUINs). For 2011/12 clinics that do not broadly follow the new guidelines, threatening to derail the pan-London approach, will having their drug budget withheld entirely.

a) Some people using protease inhibitor-based treatment that does not include atazanavir will be recommended to switch to using atazanavir-based combinations unless there is a clinical reason to stay on their current treatment. These reasons could include previous side effects and drug resistance. Only the protease component of the combination is being recommended to switch.

b) People currently on NNRTI-based stable treatment are not being asked to switch. People currently using Atripla will not be asked to change from Truvada (tenofovir/FTC) to Kivexa (abacavir/3TC), although they do have this option. This decision may be reviewed in the future, but is unlikely to change in the short-term. This is is dependent on clinics across London following the general guidelines for new and existing patients.

The protease inhibitor switch may improve treatment for many people as this may include reduced doses and lower pill counts with some changes.

The staggered approach to switching people who are stable on their current treatment is dependent on clinics across London following the general guidelines for new and existing patients.

These guidelines might also prompt a review to switch patients on older treatments that are not recognised as first choice options in BHIVA guidelines.

Raltegravir will still be used predominantly by people with documented triple-class resistance. It can also be used in a limited number of other situations where there is a clinical need. This includes cases where a rapidly reduction of viral load is important (for example HIV diagnosis in late pregnancy) or to avoid drug interactions (for example with chemotherapy). The higher cost of raltegravir compared to other first-line and second-line drugs is the reason behind this more restricted access.

Raltegravir can be prescribed by any doctor outside of these guidelines but the cost of the treatment will have to be paid by your hospital rather than by the London Consortium.

Raltegravir was initially developed as a treatment for people with drug resistance. It was also priced higher as a life-saving drug rather than a treatment for standard therapy. Although the cost for raltegravir have come down they are still more expensive that alternative switching options, so the use of other options needs first seem important for guidelines. It is disappointing that the cost of raltegravir currently limits prescribing at any treatment stage.

HIV-positive people will be able to discuss these proposals with their doctor. As with all treatment decisions, discussing options with the medical team is always recommended.

For many years, antiretroviral drugs have been bought on a pan-London basis by the London HIV Consortium as part of a way to deliver equity of care for HIV-positive people in all boroughs, independently of which London clinic they attend. Each year this group negotiates the price of each drug with each company.

While the process of drug pricing has a low profile amongst most people who use treatment, it is very complicated. The cost of a drug rarely is the same as its list price. This has led to many improvements in HIV care including greater prescribing consistency and access and use of the newest drugs. This group is as focused on the quality of care as it is on costs, and it has developed a range of services that have improved patient care.

For example, the same London HIV Consortium are responsible for establishing the New-Fill service to correct facial fat loss in NHS clinics in London. It has also helped maintain routine services by saving costs with other initiatives such as expanding home delivery of drugs (this saves VAT costs that are otherwise charged on hospital prescribed medicines).

A PDF file was added to this site on Friday 15th April.

The direct URL of this file is:

The i-Base treatment phoneline and information service is a confidential service to discuss any aspect of treatment including issues of treatment access: 0808 800 6013.

The documents below are a slide from i-Base that are a summary of the recommendations, one is PDF and the other in Powerpoint format.

These were amended on 28 March to clarify that people on currently stable NNRTI-based treatment are not being asked to switch treatment.