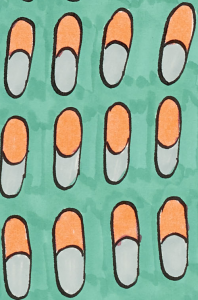 The difference between active CD4 compared to sleeping (or resting) CD4 cells has already been mentioned several times.

HIV that is inside sleeping CD4 cells cannot be reached by ART. These cells are called the latent reservoir – or more fully, as “the latently infected CD4 viral reservoir”.

Actually, most of our CD4 cells are usually resting and this is healthy. This part of our immune system is like a huge reference library with thousands of books on the shelves, not being read, but waiting for when they are needed.

Each book is like an immune response that the body developed earlier that is stored away to be quickly activated if it is needed in the future.

Throughout life, the library continues to grow. The body produces new CD4 cells which in turn are primed to respond to an infection – and then they sleep.

Some of these cells will be infected with HIV, especially during early HIV infection. These cells then sleep with HIV trapped inside. In this resting state, HIV meds have no way of working – because the viral lifecycle is not active.

Some of these cells can also sleep for decades. But they can also wake up at any time and the timing is not predictable. This is one reason why ART needs to be taken every day.

This is also why viral load generally rebounds if ART is stopped – even after many years on treatment.

Two contrasting research cases below show the complexity of HIV, especially when looking for a cure. References for these studies are on page 25.

Some people who started ART very early in infection have stopped treatment after a few years and their viral load did not rebound.

The most widely reported examples are a group of French patients called the VISCONTI cohort.

This is rare but a similar case has been reported in the UK.

Case 2: No rebound after long-term ART

A man in the US started ART within weeks of infection.

He stayed on ART for 10 years with an undetectable viral load. Special tests were needed to search two billion cells before finding one that contained HIV.

As part of a study, this person stopped ART, but viral load still rebounded.