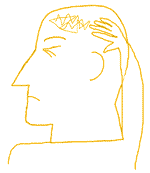 Of these, efavirenz is the main drug linked with mood changes.

Since 2016, UK guidelines no longer recommend efavirenz as the preferred choice for starting treatment. However, even in the UK, efavirenz is still likely to be widely prescribed. This is because generic efavirenz is now very inexpensive.

Although case reports of similar side effects have been reported with atazanavir/r, nevirapine, abacavir and other ARVs, these are very rare. More recently, integrase inhibitors have been linked to mood changes.

There are several difficult things about these side effects linked to efavirenz.

About a quarter of people in the first efavirenz studies recorded serious CNS side effects. This definition included ‘difficulty carrying out daily work’. So although very few people stopped efavirenz in these studies because of the side effects, you have about a 25% chance that it could make it difficult to work as normal until you get used to them.

Starting efavirenz or rilpivirine when you have a few easy days or time off work might reduce any anxiety. It might help if you are more relaxed and less stressed.

Many of the symptoms described here can also be symptoms of HIV-related diseases that are now seen less frequently such as dementia, TB or cryptococcal meningitis. These can develop slowly over time, so describing symptoms to your doctor, in order that they can rule out these factors is very important.

Some people will experience these side effects much more intensely. If this is the case, it is essential that you get more support as soon as you need it. Perhaps 2-3% of people switch to a different treatment within a few days or weeks.

However, other people only chose to switch after trying efavirenz for several months. This is because although side effects usually get easier to tolerate, they might continue at a low level for longer than the first few months.

Up to 20% of people might switch over the first year.

CNS side effects can lead to or worsen depression, including suicidal feelings and paranoia. It is very important therefore that you are aware that such moods swings can be related to efavirenz and that you are not ‘going mad’.

Why these symptoms are associated with efavirenz is not understood. It is also not possible to predict who will experience more severe symptoms.

Although you can take efavirenz with or without food, a high fat meal increases drug levels by 60% and this increases side effects.

Taking efavirenz a couple of hours before you go to sleep, rather than at bedtime, makes it more likely that you will be asleep when the drug levels are at their highest –  about four hours after taking efavirenz.

Haloperidol to reduce anxiety and sleeping pills to help with sleep disturbance might also help, although these have not been formally studied.

If you have difficult side effects with efavirenz and you are not happy with how you feel, it is very safe to change it to another HIV drug.

You do not have to continue with efavirenz to prove anything to yourself or your doctor. If you know something is wrong, don’t worry about asking to change to something else.

Even if you have only used efavirenz for a few days, if you know it is not for you, it is okay to change. Some drugs are not for everyone.

An alternative to efavirenz should be available in every country – it just means using second-line ART, usually with a boosted protease inhibitor.

If an alternative is not available, ask is a 400 mg dose is available instead of a 600 mg dose. Several studies have reported slightly lower side effects with similar efficacy using the reduced dose.

How to report symptoms

Some of the symptoms associated with efavirenz are not easy to describe. The advantage of writing down the effects you experience will let you see whether they are getting easier.

Depression and feelings of suicide: