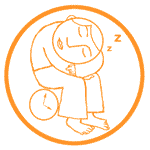 Most HIV drugs list fatigue as a side effect but this is not very common and usually mild.

Fatigue (feeling tired) used to be reported as a common symptom related to HIV and treatment. It is now reported much less frequently with modern treatment.

Many people instead find they have far more energy, even in the first weeks of treatment, because their viral load is reduced.

Fatigue in HIV positive people is often more likely to be related to other factors than as a side effect of HIV drugs.

These factors include depression, anxiety, sleep problems, other health complications, and social factors like not having work or enough money.

If your HIV meds stop you sleeping well, you will be tired the next day, so the tiredness can be due to poor sleep rather than a direct side effect of the drug.

Fatigue is defined as a general feeling of tiredness that does not really go away, even after you have been able to rest.

Fatigue can be physical or mental.

With physical fatigue you are not able to be as active as usual, even with simple tasks like going up stairs or carrying shopping.

With psychological fatigue, you are not able to concentrate as well as normal or you lose the motivation to do things.

Fatigue can be caused by many things including:

How to describe fatigue to your doctor

Fatigue can start slowly and build up without you realising it. To describe this to your doctor it helps to give examples of when you feel more tired.

If you can compare how you feel now with how you felt six months or a year ago, this will also help.

Describe how often you are tired or out of breath. As fatigue can be related to poor sleep, include information about your sleep patterns.

If you are feeling very tired and have any of the other symptoms associated with lactic acidosis (vomiting, nausea, sometimes pain in the stomach and/or liver, unexplained weight loss, difficulty breathing etc) it is very important that you report this to your doctor.

Lactic acidosis is now extremely rare in Western countries and is mainly linked to the early nuke d4T (stavudine).

Blood tests can check whether your fatigue is caused by anaemia (low red blood cells). This can be a side effect of AZT and can be treated easily with medication or with a blood transfusion in more serious cases.

You may be feeling more tired because you are not sleeping properly, and one study found this explained fatigue in over 60% of cases. There is more information about difficulties with sleep.

If you are not eating a balanced diet – ie not getting sufficient calories and nutrients for your body to function normally – this can leave you feeling more tired.

Multivitamins can be prescribed by your doctor, and supplements of vitamin B12 can sometimes help you feel more energetic.

You can also ask to be referred to a dietician who can help you assess and plan changes to your diet.

Psychostimulants like methylphenidate (Ritalin) and pernoline (Cylert) used in low doses, have sometimes been used to treat HIV-related fatigue but side effects include hyperactivity, addiction, loss of appetite and liver toxicity.

More about difficulties with sleep