Starting treatment for the first time? 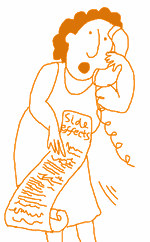 Everyone worries about the risk of side effects before they start treatment.

Before choosing your combination, ask for information about each of the drugs you might take. Ask about the likelihood of side effects. Ask what percentage of people had side effects related to each drug and how serious they were.

Before starting ART, ask for the out-of-hours phone and email contact details for your clinic.

You might be asked to join a study looking at side effects. These studies are important to define the extent of side effects when different drugs are used together.

People in studies are monitored more carefully and more frequently, so you might get better care.

Research is essential if we want new and better drugs in the future.

Can I change drugs easily?

Everyone should be offered at least two options whenever you start or change treatment. Ask about the advantages and disadvantages for each one.

Some people are not told that they have a choice. This is not right. Even if your doctor prefers one combination, you need to be involved in this choice.

If you do have problems with the first combination, you can easily modify the drugs.

There are lots of HIV drugs to chose froml. While you can’t quite mix and match them all, if one or more of the drugs in your combination is difficult to tolerate, you can change it for another.

If you change a drug because of tolerability, you can usually use it again later if you need to [except for abacavir].

Just because you used a drug once, does not mean you have ‘used up your option’ of using it again in the future.

Usually side effects improve after the first few days, weeks or months, but sometimes they don’t. See the sections on each side effect in this booklet for an idea of how long you should put up with them before changing.

You do not have to continue with a drug to prove anything to yourself or your doctor. If something is wrong, ask your doctor to change to something else. Some drugs are just not for everyone.

Can I know if I will get side effects?

You cannot know whether you will get side effects from a drug until you take it.

The only way to know is to try, and you will be carefully monitored.

Are side effects different by gender?

Generally, side effects are similar for all people. Sometimes, other factors, such as weight, might explain any differences as smaller people might absorb relatively higher drug levels.

Most HIV studies have a higher proportion of men compared to women and they include very few transgender people.

When data is available, it generaly shows few differences by gender.

What about side effects and adherence?

If side effects affect your adherence your doctor needs to know about this.

Adherence is the term for taking the meds in your combination exactly as they are prescribed. It includes taking them on time and following any dietary advice.

There is a special section about adherence and side effects.

Getting your doctor to help…

Many of us underestimate side effects when we talk to our doctor.

Unfortunately, some doctors think that we overestimate side effects.

This means there can be a big difference between what is actually going on and what your doctor thinks is going on.

This is one reason that side effects are often under treated.

If you don’t say something, nothing will change.

What happens if side effects continue?

If the first treatment you are given to help with a side effect does not work, there are usually other drugs that you can use.

In this guide we list a range of options, including alternative treatments. If one doesn’t work then try others.

Changing one HIV drug for another is also an important option.

Stopping treatment is not generally recommended, but for some people in some circumstances, this might still be considered.