Access to appropriate care and treatment is dependent on first diagnosing HIV and then managing the infection both on and off treatment.

For anyone over 18 months old, an initial HIV diagnosis is usually made using a rapid antibody test – of which there is quite an array of choices that are cheap, accurate, and easy to use within decentralised care.

CD4 tests are recommended for staging and monitoring the disease prior to initiating antiretroviral treatment ? and for monitoring immune response to treatment, allowing opportunistic infection prophylaxis to be removed if higher CD4 counts are achieved ? and viral load tests once treatment is started.

Because of passive transplacental transfer of maternal antibodies that can persist for up to 18 months antibody tests cannot be used for the accurate diagnosis of infants. So virological testing needs to be performed to determine an infant’s HIV status and enable immediate initiation of antiretroviral therapy (ART).

Although there are currently many options available for CD4 and virological testing, they are expensive and require sophisticated, centralised laboratories and trained technicians. To improve access to diagnostics in resource-limited settings and to make them affordable, they must be delivered as close as possible to the patient. A recent technical report from UNITAID describes a ?diagnostic landscape? with high volume testing performed in centralised facilities (“super labs”) where feasible, and, most importantly, a drive towards decentralised point of care (POC) testing in harder to reach populations.1

This chapter looks at the latter and describes promising POC technologies in the pipeline for CD4, viral load and early infant diagnosis (EID). These tests may be commercially available within the next couple of years. Many of the test sponsors appear to believe that their products will launch commercially next year. If their predictions come true then 2012 will be a bumper year for HIV POC diagnostics. The authors cannot guarantee that this bonanza will occur in 2012.

CD4 tests determine the number or percentage of CD4 T cells in a mm3 of blood.

Flow cytometry is the gold standard technique for CD4 testing. It is a technique for counting CD4 cells by suspending them in a stream of liquid and passing them by an electronic detector.

The machines used to perform these tests are big and expensive, use complex systems of lenses, lasers and electronics, and require an uninterrupted supply of electricity and highly trained technicians.

DNA-PCR testing is most commonly used for EID. Although DNA-PCR has been used in resource-limited settings, its long turnaround time contributes to infant loss-to-follow-up and loss of benefit of immediate initiation of treatment. These tests do not provide measurements like RNA-PCR, but just detect the presence of the virus and give a ?yes? or ?no?. Currently, no POC DNA-PCR tests are available for infants.

The p24 protein is the antigen that most commonly provokes an antibody response to HIV. Early in HIV infection, p24 is produced in quantity and can be detected in the blood. It falls to low levels as the infection becomes established.

p24 antigen tests are not usually used for general HIV diagnosis, as they have a very low sensitivity and they only work before antibodies are produced in the period immediately after HIV infection. But p24 tests could be useful for EID.

In order for a diagnostic test to be useful within a decentralised setting it should meet the WHO ASSURED criteria for the ideal rapid test, which is as follows:

The CD4 Initiative, based at Imperial College in London, was set up in 2005 to develop simple, instrument-free CD4 point of care tests designed specifically for rural areas in resource-limited settings.2

They began with a target product profile with a set of specifications that elaborate on the ASSURED criteria.

In partnership with Zyomyx they have developed a fully quantative CD4 counter, that can be read visually without an electronic reader, much like a thermometer. It consists of a disposable cartridge with a mechanical spinner that requires no power supply. The test can measure an absolute CD4 count without complex instruments. Clinical trials are expected in 2011. If the results are positive, the test could begin to become available by 2012, according to Zyomyx.3

The Burnet Institute – who also worked on their prototype within the CD4 Initiative – is continuing to develop a rapid CD4 test in collaboration with the Rush University Medical Center and Duke University.4

This test is semi-quantative and will give a read out showing whether someone’s CD4 count is above or below a predetermined threshold – e.g., 350 cells/mm3. The user then can make a treat/don?t treat decision. Burnet is developing a reader for the device in collaboration with Axxin Ltd.

Clinical trials are planned in 2011 in the United States and Malawi. The further development and the launch of this test will depend on trial results and project funding.

Daktari Diagnostics is in late stage development of a portable CD4 cell counter. The device is a portable battery run instrument. Each CD4 test consists of a disposable plastic card, which is inserted into the instrument. The test measures absolute CD4 count.5

MBio Diagnostics is developing a system that uses disposable cartridges and a simple reader instrument. It provides an absolute CD4 count.6

Field-testing in southern Africa is scheduled for later this year. 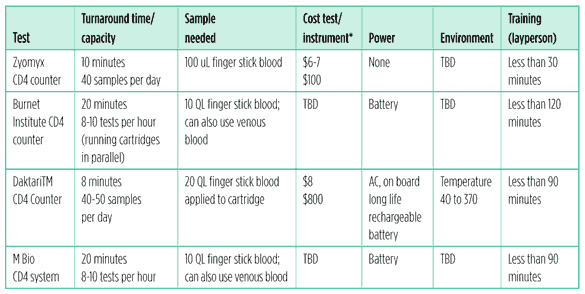 The SAMBA (simple amplification based assay), is currently being developed by the Diagnostics Development Unit at the University of Cambridge.7

They are developing two tests, a semi quantative test for monitoring ART and a qualitative test for EID. The tests use isothermal amplification and visual detection by dipstick. SAMBA is being field tested by MSF in Malawi.8

The Liat TM Analyser, manufactured by IQuum, POC HIV assay is a real time, battery operated, small, portable, PCR kit. Blood is collected in a tube and inserted into the analyzer. Results are quantitative.

Clinical trials are scheduled for 2011 with the potential for launch in 2012.9

Alere NAT system is a generic platform designed to detect various nucleic acids. The first test – anticipated to be commercially launched next year – is a real time detection method for measuring quantative HIV RNA. The sample – which can be from finger-stick, whole blood, or plasma – is applied directly onto the disposable cartridge, which is processed by a compact, battery driven instrument.10 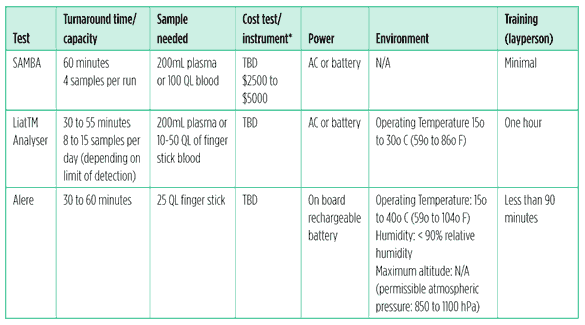 Virological testing or ultrasensitive p24 antigen testing should be used for EID. It is possible to use qualitative HIV RNA assays, as described above, as an alternative to HIV DNA. The SAMBA system is developing a test especially for this purpose.

North Western Global Health Foundation (NWGHF) is developing an HIV DNA-PCR test which is on hold – is not yet ready for field-testing – while the group focuses on a POC p24 test.11

Both Micronics and BioHelix have DNA tests which appear to be in the proof of concept stage and are not ready for field-testing yet either.

The NWGHF p24 antigen rapid test consists of a plasma separator, reaction tube, reaction buffer, and rapid test strip. It is small, battery operated, and expected to be inexpensive. It has demonstrated about 95% sensitivity and 99% specificity.12

Clinical and field trials are expected to start this year and it should be available in 2012.