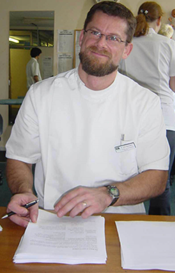 It is with immense sadness that we report the death of Paul Blanchard, an inspirational activist, a founder of i-Base, the first editor of HTB, and a long serving member of the HTB editorial board.

Paul played a unique role in establishing treatment activism in the UK, challenging doctors to continually update their views and practice with evidence from rapidly evolving research.

Before helping to found HIV i-Base, Paul was a leading member of the AIDS Treatment Project (ATP) which was founded in London in 1996, where he edited DrFax, the forerunner to HTB, from 1996 to 2000.

Like many members of ATP, Paul experienced first hand the dramatic benefits of new combination therapy. He was one of the leading activists to recognise the need for using triple combinations to achieve optimal and sustained viral suppression and to avoid drug resistance when UK guidelines – and many other HIV organisations – suggested fewer drugs might be sufficient.

Despite being a generally reserved person, Paul took to the microphone at an early BHIVA conference in 1996, to protest at this apathy among many UK doctors to recognise the need to understand the implications of new treatment.

For most of the last ten years, although Paul continued to be a member of the HTB editorial board after he stepped down as editor in 2003, his primary focus was working at the British School of Osteopathy, where in addition to his teaching practice since 1988, he established the Chapman Clinic, to provide an HIV osteopathy clinic, in association with the Royal Free Hospital.

Paul had a tremendous and steady intellect and a unique critical view that enabled him to comment on new advances and current practice with such masterly understatement that would make disagreeing with his conclusions extremely difficult.

He also had a wicked sense of humour, adding an article on the increases in “internet-related STIs” with a chuckle “because doctors love reading about this sort of thing” or commenting proudly on his own 7-drug salvage regimen in the late 90s that “none of them are made by Glaxo”.

i-Base trustee and former ATP member, Hope Mhereza said: “Paul was a big influence on the growth of treatment activism and much of what we know now and do today is owed to his involvement in the early years of HIV, when little was known of how treatments work. We are immensely proud of Paul and the HIV community is poorer without him.”

Our thoughts and wishes are with his partner, family and friends.

The BSO website includes a webpage in memory of Paul.

The following short talk was given at Paul’s memorial service.

I’d like to thank Anna and BSO for organising everything today and for the chance to say a few words about Paul’s work as a treatment activist.

Paul was a remarkable man – and unique in his skills and intelligence and humour.

His impact was huge. He showed by example how it was possible to make a difference.

He believed that with good information everyone could make their own decisions about treatment – at a time when everyone else was deferring to their doctors’ expertise.

Paul was serious and considerate and was usually happy keeping back from the limelight – although his frustration did cause him once to storm the stage of a UK medical conference to get access to the microphone.

He really played a leading role in changing the approach to HIV treatment in the UK. AND – quite remarkably – he was universally liked and respected by everyone.

Many of the doctors that he worked with then say his activism changed their practice.

We first met when I was volunteering for a HIV organisation in the mid 1990s that was set up to tell people that treatment was okay and to tell doctors they were generally wrong – an interesting dynamic.

Paul was the editor of a bulletin called DrFax – that was sent out every two weeks. He was leading a group of HIV positive people – most with no formal medical training but with the experience of having been saved by treatment – to summarise the latest evidence for UK doctors.

And Paul used amazing understatement to sound so cautious and moderate when he was really accusing many of malpractive.

Rather that run into a room and call people murderers – he’d just suggest: “how unreasonable it would be for a doctor to continue suboptimal treatment given the latest rapidly evolving evidence” – neatly pointing out the implications this would have on their patients long term options for care.

Paul was at the International AIDS conference in Vancouver in 1996 when combination therapy breakthroughs were first announced. DrFax include conference reports, research news, activist reports from the US, experimental treatments etc.

Before effective therapy, Paul was also interested in alternative approaches. At ATP we at once time had 30 boxes of experimental treatments shipped to us from India. But the difference Paul and the Dallas Buyers Club is that he took one look at the contents and said without evidence he wouldn’t touch this himself and certainly not give that to anybody else.

Paul was one of the first people to use google. He proudly cut and pasted irrespective of copyright and his inspiration was the punk fanzine “Sniffin’ Glue” than The Lancet. He was reporting the need for latest drugs – protease inhibitors – long before they were licensed or available in the UK.

And while the office was usually busy with lots of activity – for the volunteer phoneline or whether we had been able to pay the rent – Paul would slip in quietly – share a few jokes – then sit quietly at a computer and add masterly understated comments to the final copy of his publication.

This was at a time when most leading doctors and all HIV charities were still urging caution and restraint.

Paul knew from the science that the opposite was true – that the combinations needed to use at least three drugs, that viral load needed to become undetectable and that drug resistance was something you didn;t want to get.

For his own health, Paul had reached late-stage AIDS with a completely wrecked immune system. He had had very visible Kaposi’s Sarcoma and keeping his teaching job was not easy. But still he didn’t taken the first single drugs waiting until there were three active drugs were available.

Once Paul had an idea that he knew was right – shown by evidence – he stuck with it.

His letter to the Lancet critical of the guidelines published by UK doctors meant that the update the following year referenced DrFax as a source.

But for all this brilliance – Paul never wanted HIV activism to be his career – that was for the work he developed with BSO – with teaching – developing osteopathy services for HIV positive people – unique service I think to this day.

But Paul’s example drove many people to stay engaged and stay involved – he cofounded HIV i-Base continuing for many years as leading editor of HIV Treatment Bulletin that succeeded DrFax – and continued to support us even when focused on BSO.

Paul coped with much of this this as a young man and must always have had this determination.

When he met his first boyfriend – knowing how important this man would be – he followed him home and spent the night sitting outside determined he wasn’t going to miss him leave in the morning – and I think this was December – not July.

Because for all Paul’s scientific brilliance and reserve in in analysing data he was driven by a concern for people. And for all these reasons I speak for everyone who knew Paul as a treatment activist, that we were also very lucky to have known Paul as a friend.