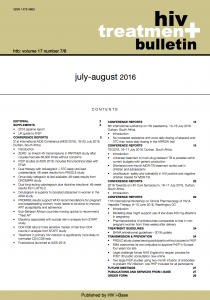 This summer issue of HTB contains reports from five medical conferences and rapidly changing news about PrEP in the UK.

In addition to AIDS 2016 held in Durban in July, there were important workshops before the main conference on paediatric care, cure research and TB. We also include reports from a pharmacology workshop held a month earlier.

Much of the news from AIDS 2016 was linked to HIV prevention.

Our report from the PARTNER study – together with a non-technical Q&A on the results – reached more than 40,000 people in the first week from the i-Base Facebook page, with 300 shares and translations into Spanish, Russian and Turkish. PARTNER produced a large dataset questioning whether HIV transmission effectively occurs on ART: there were zero HIV transmissions after serodifferent couples had sex more than 58,000 times without using condoms.

The reluctance to accept these results is highlighted by the contrast to responses to the PROMISE study – also reported at Durban – in which the risk of transmission from breastfeeding on ART was reported as 0.3% and 0.6% over 6 and 12 months respectively.

The NIH press release from PROMISE noted that this risk is so low that breastfeeding can now be widely recommended, even though actual transmissions occurred. In contrast, the editorial in JAMA accompanying the PARTNER results incorrectly stated “the risk is far from zero” even with no reported transmissions.

The absence of case reports in the eight years since the Swiss Statement was published contributes to the hypothesis for the PARTNER study that the true risk is zero when viral load is undetectable on ART. The challenge to researchers is still to report such cases if they in fact occur.

While the rest of the world is expanding access to PrEP, NHS England is still fighting to block this in the UK. NAT should be congratulated for winning the legal challenge, but an appeal could easily over turn this result. More importantly, the 45-day public consultation on PrEP was posted online on 10 August for you to register your own views.