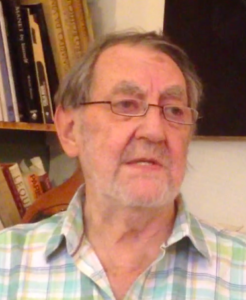 It is with great sadness that we report that on 24 January 2021, Dr Joseph Sonnabend, the pioneer activist and research, died after a short illness.

Joseph Sonnabend was one of the most important and high profile HIV doctors in the US who was less known in the UK because his working life was spent in New York. In 2005, he retired to London, where he continued to talk and write about HIV, and where, together with other UK activists, I had a chance to get to know Joe as a friend.

Joe was a highly intelligent and complex man, who above everything else was loved by his patients. Many became close friends and at different times he was the doctor for most of the leading US activists, who credit him now for their surviving long enough to benefit from treatment. He had a daunting reputation for founding key organisations, and a character that, at least in later life, as well as being fiery, was cautious and self-doubting.

Early in his career, Joe was a microbiologist and basic science researcher at the Medical Research Council (MRC) in London where he worked with Alik Isaacs in the lab that discovered interferon. In the late 60s, he moved to New York to continue this research as an assistant professor at Mount Sinai Medical School. He would pointedly and proudly comment on his pre-HIV career as being “actually quite significant, before all this”. For example, he knew and visited Jan Vilček during the early 196s in what was then Soviet Czechoslovakia.

At some point his research position became complicated (many of his relationships were not straight forward) and he became interested in gay men’s sexual health. He worked for the NYC health department (moonlighting), volunteered in the mid-70s for the Gay Men’s Health Project, and set up a private medical practice in 1978 (where he would run microbiology samples to get the best results for his patients). He could also make his own poppers. As his practice increasingly focused on HIV, he often didn’t invoice patients; he would take their calls at any time, and support their partners, families and friends.

This meant Joe saw some of the first HIV cases long before AIDS or HIV had been reported or named. He was one of the first doctors to report on immunodeficiency and CD4 counts – at the time only recently discovered. His experience as a microbiologist, scientist and doctor who was also a gay man put him in a unique position to respond to HIV and this quickly became his life’s work.

Joe was an early champion of peer advocacy and in supporting the active involvement of HIV positive people in their own care. He worked with Michael Callen and Richard Berkowitz to produce an early high-profile sex-positive guide to safer sex in 1983. This was often difficult. As in the UK, the suggestion to use condoms or to limit partners – based on science not morals – was publicly vilified by many in the gay community.

He also gave people hope, by his confidence that some people would survive, even when so many people were dying. One of his principles about infectious diseases – whether HIV or hepatitis B or coronavirus – is the wide range of responses reported by different people. In this he was right – though – like other major scientists – he was controversial for many other issues.

With Mathilde Krim (already an old friend and who also recently died), Joe founded the first private organisation to fund experimental research. This foundation became amfAR. He helped found the community research organisation that became ACRIA and the PWA group in New York that became one of the first buyer’s clubs. At different times, he often became separated from organisations, and found it difficult when he thought he had been treated badly. Joe was outspoken over the lack of key research and could be disparaging over the skills of the doctors and researchers who did come forward to work on HIV. This included some of the highest profile public figures and this, perhaps, didn’t make for an easy career path.

In his focus on careful management of opportunistic infections, Joe was using cotrimoxazole as prophylaxis for PCP in the early 1980s, long before most doctors were even using this for treatment. This is more than just a historical chance. Treatments for PCP had been discovered years earlier, and this left Joe with a lifelong anger for how long they took to be commonly used for HIV management

“Infections of the immunocompromised host was a distinct sub-speciality of infectious diseases. There were people who knew about that. […] We knew how to prevent infections and how to treat many of them. That experience could have been brought to help people with AIDS in 1981, including prophylaxis for PCP. That information was known in 1977, so why wasn’t that translated into practice?”

Joe accumulated significant records from his life and practice. Many of these were donated to the New York Public Library. But many also came back to the UK, where thanks to his friendship with the HIV activist Simon Watney, another 100 archive boxes are now housed at the at the London School of Hygiene and Tropical Medicine.

One box included thank you cards and letters from his patients – and there were hundreds of these – a copy of the New York Native, or POZ magazine, with Joe on the front cover, records from his own family, maybe from 50 years earlier, notes on early medical papers, a letter from the president of amfAR, another from Marc Christian, plus a couple of gas bills. His early diaries recorded those who had died and he had ansaphone tapes with thousands of messages. Joe kept these voices from the past because they carried the evidence that these people were real and that their lives were important.

But his house also included a grand piano that had come back from NY. Although Joe had composed music throughout his life, he had his first debut in June 2018 at the Fitzrovia Chapel, as part of the AIDS Memorial Project, organised by Ash Kotak, which was filled to capacity, and which also made him smile.

Joe was a pretty fiery activist who fought for his patients, but who was also pretty shy and reserved – as you can hear in some of the linked interviews below. He made a huge impact on thousands of HIV positive people and he will be deeply missed.

The first two links below are to BBC interviews that include some of his music and the third is a track from the London concert. The Buzzfeed article is a good portrait of his life in London. Joe also gave the final 100-page interview for the ACT-UP New York oral history project and a webcast interview last year in POZ magazine.

Facebook page that includes a song from the London concert.
https://www.facebook.com/BBCOutlook/posts/dr-joseph-sonnabend-is-an-hivaids-pioneer-and-a-musical-composer-/10156443898102902

Patrick Strudwick. This doctor was one of the first to identify AIDS. Now he’s making his debut as a composer at 85. Buzzfeed news. (23 June 2018).
https://www.buzzfeed.com/patrickstrudwick/this-doctor-was-one-of-the-first-to-identify-aids-now-hes

Michael Callan and Richard Berkowitz. How to Have Sex in an Epidemic, (1983).
https://en.wikipedia.org/wiki/How_to_Have_Sex_in_an_Epidemic

This article was first published on 30 January 2021.