It is with great sadness we report that two leading HIV activists died this Autumn and these short tributes in memory are to recognise their work over many years.

Both were remarkable people who in different ways affected the lives of many thousands of people living with HIV.

Our thoughts are with their families and friends. 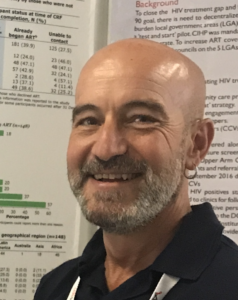 Giulio Maria Corbelli was a leading Italian HIV and LGBT activist based in Rome, since his diagnosis in 1997.

He brought an amazing energy for both HIV prevention – helping to establish and run the Checkpoint clinics in Bologna and Rome where his good looks made him a natural model for posters about safer sex – and HIV treatment – where he was a community representative on the national treatment guidelines.

Guilio was also a European activist and as a long-standing member of the European AIDS Treatment Group he focussed on treatment, using his understanding of HIV science to chair the European Community Advisory Board (ECAB) for four years, represented the EATG at the European Medicines Agency and was involved with many scientific conferences including EACS and Glasgow. More recently he became a leading activist involved in cure-related research,

I was lucky enough to work with Giulio on two large international studies, both of which ended up running for around ten years. One of these – the PARTNER study – produced the largest dataset to prove that having an undetectable viral load on ART prevented sexual transmission even without condoms. The second – the START study – proved there were clinical benefits of ART even at high CD4 counts, and changed national and international treatment guidelines overnight, generating data to support universal access to ART in every country.

Giulio contributing as many comments to scientific papers, as to the original study design and the wording of patient information. And he continued to be active even though he had complications from cancer for the last two years.

Most importantly Giulio brought an amazing warmth and enthusiasm to everyone he met and every project he was involved in, shown by messages posted by activists and researchers from dozens of countries in tribute from the many groups he had worked with, that were collected for his family.

As one colleague from the PARTNER study said: “things happened when Giulio got involved. I will miss his smile and his insights”.

Giulio leaves a long history of achievements as an activist and many memories for his spirit as a friend with a smile and the warmth he brought with him wherever he went. 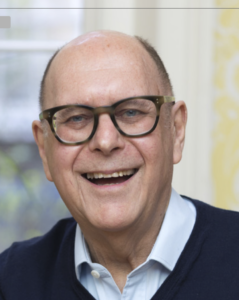 Chris Sandford found out he was living with HIV before there was a name or a test, and as one of the first people to be diagnosed he spent over 40 years committed to supporting others.

Chris brought the experiences from that impossible period, including caring for his partners when stigma and discrimination were at their highest, and his knowledge of managing his own health care, to developing peer advocacy.

At an age when many people were happy to retire, Chris became a peer advocate for ten years at the Mortimer Market clinic in central London, where he helped many hundreds of people slowly take control of their HIV diagnoses.

Chris was also committed to keeping the history of HIV alive and not forgotten. He brought four decades of lived experience to support and develop projects that recognised the important of our histories. He was one of the first people to be interviewed for the National HIV Story Trust and went on to become Education Director, volunteering as a speaker for schools and colleges with qualities that let him easily connect with people of all ages and backgrounds. He talked movingly of his personal experiences as a carer for his lover and his own history with HIV.

Memory Sachikonye, a long term friend and colleague, remembered Chris: “for always checking about my health first, even if contacting me about work. We were both living with HIV and a kidney transplant and we always supported each other. I will always value his kindness and caring personality and he will be missed by me and the HIV community.”

Even though his own health was difficult, Chris always brought such positive energy to his work and confidence that he still had a huge amount to offer. Like so many other people, I had seen Chris only a few week before he died, to talk about the importance of oral histories, when it was clear he was still deeply affected by the early loss of his partner and equally committed to making sure our stories continue to be told.