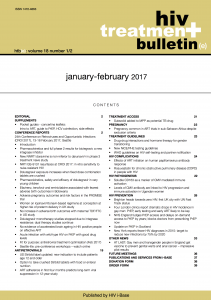 The latest issue of HTB is now online.

This first issue of HTB for 2017 comes slightly late in the month to be able to include rapid reports from CROI 2107.

As usual, this major scientific meeting had much to report – with 14 articles in this issue and more to follow next month (these will be posted earlier online).

The conference was particularly notable for the number of studies involving new drugs or formulations – and we start with bictegravir, doravirine and GS-9131) and dolutegravir formulations for younger children.

We also include four studies on ART use in pregnancy, disappointing news that dolutegravir monotherapy studies are now discontinued, a case of PrEP failure, plus more encouraging news that ART might protect against accelerated brain ageing.

And sexual health reports in England include a dramatic drop in HIV incidence in London clinics and a successfull ongoing pilot HPV vaccine programme in gay men and transgender people – at last.

Less impressive is the continued block to PrEP.