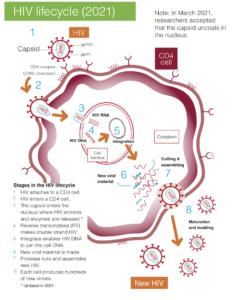 HIV is a tricky virus. Instead of being destroyed by the immune system it uses immune cells to reproduce.

For the first 10 days or so, HIV stays hidden. It is impossible to detect or test for.  But millions of copies of the virus are already being made in lymph nodes near the body site of infection.

When these swollen lymph nodes burst, HIV is carried throughout the body. In response, your immune system makes even more immune cells, especially CD4 cells.

This process lasts a several weeks until your immune sytsem starts to reduce levels of HIV. The period is called seroconversion.

Instead of clearing the virus, CD4 cells are used by HIV to replicate. This continues until you start ART.

Each replication cycle lasts for about two days and has several stages. Each stage can be a target for HIV drugs.

* This page updates earlier editions to describe the capsid being absorbed directly into the nucleus and to update the diagram. See:
CROI 2021: HIV capsid uncoats in the CD4 nucleus rather than the cytoplasm – viral lifecycle updated…
https://i-base.info/htb/40151
The animation of capsid uncoating is about 24 minutes into this online webcast:
https://www.vcroi2021.org/live-stream/19762730/MONDAY-PLENARY-SESSION