When to use new drugs and when to wait?

Any new combination should use at least two fully active drugs.

Using new drugs without other active meds will only give a short-term benefit. Viral load is likely to rebound again with more resistance. See Figure 9.

Figure 9. Using only one active drug will only work for a short time 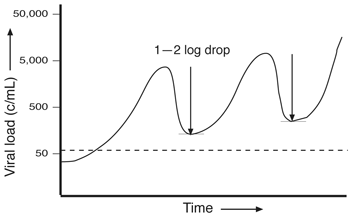 Only one active drug is unlikely to get viral load to less than 50 copies/mL.

If a new drug is not helped by other active drugs, resistance will develop.

It is only worth using one new drug if your CD4 count is very low. For example, if it is less than 50 cells/mm3 or if you have other serious symptoms.

Otherwise, it is better to wait. Using two or three new drugs together is usually a better strategy.

This will make the new combination stronger. It will then perhaps be able to reduce viral load to undetectable. The benefit will then be long term. See Figure 10.

Figure 10: Waiting to use three new drugs is more likely to get viral load undetectable 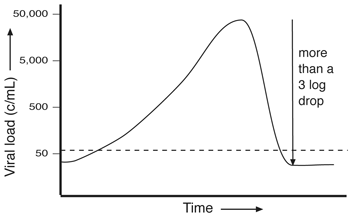 Waiting to use two or three new drugs together will make the new combination stronger. Viral load can now get to less than 50 copies/mL.

If viral load gets to below 50 copies/mL it is likely to stay there without rebounding or developing further resistance.