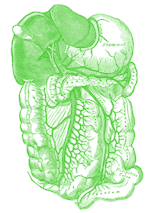 The natural history of an infection is the term for describing what happens without treatment.

Modern HCV drugs (DAAs) can cure HCV in more than 95% of people using their first treatment.

Unless it causes symptoms – and about 80% of people do not have any symptoms–acute HCV is rarely diagnosed. Symptoms, when they do occur, include fever, fatigue, abdominal pain, nausea, vomiting, dark urine, pale faeces and jaundice.

HIV positive gay men should have an annual screen for HCV.

In the first few months after infection, up some people clear the virus without HCV treatment.

This is called spontaneous viral clearance and is more common if:

HIV positive people are only half as likely to spontaneously clear HCV as HIV negative people. People of African descent are less likely to clear HCV than Caucasians.

Genetics are part of the reason for these differences, but other factors that we don’t know are also involved.

People who clear HCV without treatment are no longer infectious. They may still test positive to an HCV antibody test because they were previously infected, but HCV will not be detectable in blood.

Whether or not to treat acute infection is complicated by three medical factors.

Some guidelines (including from the European Liver Association, EASL) recommend using DAAs in acute infection, even though these drugs are only approved for chronic infection.

UK guidelines – due to be updated – still recommend treating acute HCV with old HCV drugs (pegylated interferon and ribavirin). These drugs would not now be used.

Chronic infection refers to any time after acute infection (the first six months after infection).

Some people never develop serious liver damage or symptoms. But most people will have mild to moderate liver scarring (fibrosis) or symptoms such as fatigue, depression and confusion. Untreated HCV can also cause other health problems.

HIV increases the risk for, and speeds up the rate of liver damage from HCV. This is why access to DAAs may be easier for people with coinfection.

Currently in the UK, people with pre-cirrhosis and cirrhosis are getting DAA treatment. But it is important to be treated before serious liver damage develops.

The risk for liver cancer remains high for people with cirrhosis, even after being cured and requires continued screening.