US PrEP guidelines (May 2014): emphasis on broad access may miss optimal use by people at highest risk 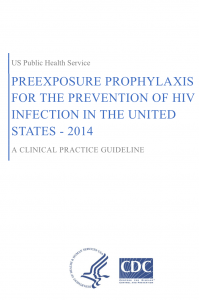 On 14 May 2014, the US CDC updated guidelines for using daily oral tenofovir plus FTC (Truvada) as PrEP. [1]

These recommendations for how and when to use PrEP are broadly similar to previous interim advice issued in January 2011, but the resource has been greatly expanded.

The summary of indications stresses that PrEP is an intervention for men who have sex with men (MSM), heterosexual men and women and adult injecting drug users that are “at substantial risk of HIV acquisition”.

However, the expanded definition of substantial risk for sexual transmission is:

Another summary of the criteria for significant risk (Table 1 in the guidelines) includes having a high number of sexual partners or a history of inconsistent or no condom use. Sex work is also included as a criteria to use PrEP.

The 67-page guidelines and 43-page clinical providers’ supplement are published as PDF files. [2, 3]

The guidelines are designed as a practical guide to support healthcare workers to prescribe PrEP. They include background information on assessing risk, patient materials and an evidence review.

These guidelines are a political response to the continued US epidemic, where, similar to the UK, annual numbers of new diagnoses have remained persistently high for the last decade. They are also a response to the low use of PrEP: where less than 1800 at-risk HIV negative people started tenofovir/FTC (Truvada) in the US, eight months after it was approved for this indication. [4, 5]

The guidelines were quickly supported by a statement from 82 US-based community organisations that understandably challenged a high-profile negative campaign against PrEP. [6]

Activists who support PrEP have also responded with other campaigns including the “Truvada-whore” T-shirts in order to positively affirm this can and should be an active choice (in this case, for gay men). [7, 8]

However, even in this context, the guidelines have a few important limitations.

In Europe, although Truvada has not been submitted to the European Medicines Agency for a PrEP indication, it can be prescribed if a doctor believes this is appropriate. However, funding for PrEP in the UK has been complicated by the recent decision to separate commissioning of prevention and treatment services.

This is likely to make results from the ongoing PROUD study especially important in determining whether access to PrEP is broadened in the for people at high risk of HIV. Broader NHS access should be a community demand for activists involved in HIV prevention. [10]