Open label oral PrEP at four doses a week: why zero infections does not equal 100% efficacy

One of the most important advances at AIDS 2014 was a late-breaker study on open label use of oral PrEP, presented by Robert Grant from UCSF. [1]

The results were important for two reasons. Firstly, participants knew they were receiving active treatment. Secondly, they knew that PrEP had not only been proven to be highly effective but that efficacy was also dependent on good adherence. A more detailed review of the large and complex dataset were published in Lancet Infectious Diseases to coincide with the conference. [2] 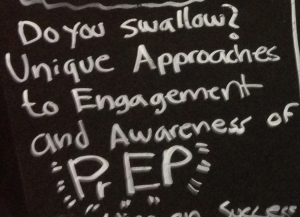 Although participants were predominantly from the extension to the iPrEX study (iPrEX-OLE), two smaller PrEP studies were also included – ATN 082 and the US Safety Study.

The open label study included 72 weeks follow-up and involved monthly clinic visits for the first 3 months and quarterly visits thereafter. Of note, PrEP was not prescribed as continuous treatment: participants were actively encouraged to use PrEP during periods that they thought it was appropriate. This tested a more likely real-world use of PrEP.

Although the iPrEX data contributed to US FDA approval in 2012 of a PrEP indication for daily tenofovir/FTC, uptake was very slow, with use by fewer than 2400 people in the 18 months post-approval (roughly half of whom were women). [4]

Modelling studies in a later pharmacokinetic analysis that included iPrEX data, suggested that either alternate day or daily adherence would provide levels of protection of 96% and 99%, respectively. [5] This assumed previously reaching steady-state drug levels, which are estimated to take one week of daily dosing. [6]

Although this second step reduced overall uptake to about 45% of previous study participants, this could be a positive result. Interpreting the PrEP cascade is dependent on whether each step results in an increasingly higher risk group that is using PrEP. Low risk loss is a good thing. This is fundamentally different to the treatment cascade where every loss is clinically important.

It is helpful that there were some statistically significant differences between people choosing or declining PrEP, and that some of these choices were related to higher background risk for HIV. For example, uptake was 81% vs 75% in people with vs without recent receptive anal sex without a condom (p=0.003) and was 77% vs 75% in those who were HSV positive vs HSV negative (p=0.03). However, although statistically significant, these differences are modest. They also didn’t showed a consistent relationship to HIV risk as there were no differences by age, education, use of alcohol (high usage) or recreational drugs (cocaine or methamphetamine, both low usage), gender identity, known HIV positive partner, other STI infections (syphilis or gonorrhoea), or previous trial experience (active vs control), all p >0.05, NS.

Reasons given for declining PrEP (obtained from a computer-assisted self assessment) included a concern for side effects (50%), not wanting to take a daily pill (16%), not liking pills (13%) preference for other options (14%) and concern for stigma about either HIV (7%) or assumed sexuality (3%).

Drug levels were measured for all new cases of HIV infection, and in an additional randomly selected control group who remained HIV negative. Measurements were performed with a newly developed dried blood spot assay for tenofovir diphosphate (TDF-DP) that was able to detect a single dose taken in the previous four weeks. This was considerably more sensitive than the previous plasma test. The long intracellular half life of TDF-DP results in relatively wide target levels of detectable drug: with LLOQ-350, 350-699, 700-1249 and >1250 fmol/punch correlating with adherence levels of <2, 2-3, 4-6 and 7 doses/week, respectively. If no drug was detected adherence was assumed to be zero.

The percentage of follow up time that participants had in each of these three bands (>4 and daily dosing were combined) was 26%, 12% and 33% respectively. A further 25% had no detectable drug levels, interpreted as zero adherence (or perhaps a period off PrEP). Approximately 5% of people did not have drug level results.

Most people started with good adherence (90-100% at week 4) but this dropped over time, with time on study being the major contributing factor. This data categorised adherence as “any detectable drug level” prior to infection for those who became HIV positive: approximately 80% people had detectable drug at 48 weeks and 60% at 24 weeks prior to infection, but less than 40% at the time of infection. This compared to 70% at week 72 in people who remained HIV negative. When using a cut-off for clinically relevant drug levels, associated with 2 or more doses a week (>350 fmol/punch), only 50% of both cases and controls had this level of adherence at the start of the study, dropping to about 40% in controls after 72 weeks and to less than 5% of cases at the time of infection. Virtually all infections in iPrEX-OLE were in people who had drug levels at the time of diagnosis that indicated a likely adherence level of taking two or fewer doses a week.

This step in the PrEP cascade – ie adherence – lost between a half to two-thirds of participants (depending on how strictly adherence was defined). There is some evidence that this related to risk and that at least some of these losses were leading to PrEP being taken by a higher risk group.

Transgender women were 70% less likely to have detectable drug levels (aOR 0.72, p=0.02) than MSM, although the study rightly concluded that very low numbers of transgender women participants highlighted the need for further studies in this population.

Several assessments looking at risk behaviour during the study, reported no evidence of risk compensation, with risk behaviour appearing to reduce both in cases and in people who remained HIV negative.

However, contrary to headlines in most media reports, the results do not show that PrEP is 100% effective.

Statistically, even with 7 doses a week, the actual level of risk reduction could be as low as 86% and that this could drop to 21% in people only taking four doses a week. The lower margin of the 95%CI is important. Statistically, there is also a 2.5% chance that the real level of protection could be lower still. Although this wide confidence range is a factor of the size of the study, the number of infections, and the duration of follow-up, it might be an important caution before suggesting that alternate dosing is as acceptable.

So while the results do not show that PrEP is 100% effective with good adherence, they show it is likely to get very close. The results also show that even when people know that PrEP works, and they know they are at risk, adherence is a challenge. As with early days of ART, focusing on adherence support may help improve this, as would other formulations and delivery methods. As an option, PrEP has large potential for anyone at high risk, which is a wider population than gay men. It allows anyone who is unable to negotiate safe and consistent condom use to protect this aspect of their health.

iPrEX clearly demonstrated that PrEP works in people who take it. But several thousand participants were enrolled in the original iPrEX study in order to prevent a couple of dozen infections over roughly a year (36 cases in the active arm vs 64 is the placebo group). In iPrEX OLE, much of the potential protection was lost because of suboptimal adherence. Some level of consistent adherence is needed, preferably more than four doses a week, though missing occasional doses in a daily schedule has little impact on efficacy.

Irrespective of how effective PrEP is, and contrary to the conclusions in the AIDS 2014 presentation, it may be problematic to claim that 43% uptake is “high” especially when drug was provided free and from experienced PrEP providers. Public health officials who are worried about costs can perhaps breathe a little easier: daily oral PrEP will not be for everyone. Several community surveys have also reported that only about half of sexually active HIV negative gay men would be interested in using PrEP. [7]

The “PrEP cascade” as a concept is likely to get an increasing focus but needs to be interpreted carefully. Unlike the treatment cascade, where every loss has a clinical implication, each step for PrEP could be a positive outcome if it is selecting out those as lowest risk and focusing the intervention on those who need it most.