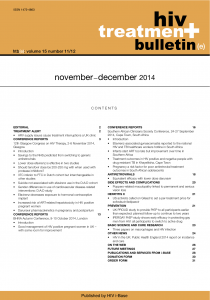 In this last issue of HTB for 2014, we lead with reports of UK stock-outs that resulted in people having to interupt treatment. This is unacceptable on every level.

Several themes then connect different meetings and reports throughout the rest of this issue.

The first of these might be a comment on the number of medical conferences and meetings that have taken place since the last issue of HTB. So while we include reports from the Glasgow Congress, the BHIVA Autumn meeting and the Southern African Clinicians Society conferences in our main reports, in On The Web we also link to the inaugural HIV Research for Prevention (HIVR4P) and the 5th HIV and Ageing Workshop. Most of these meetings include free to access webcasts, abstracts and presentations.

A second theme is whether some ARVs are currently being used at higher doses than necessary. This refers to efavirenz and tenofovir (TDF) – in reports from Glasgow – and darunavir (based on a review of recent publications and presentations). Dose optimisation of ARVs might reduce the cost of treatment, a theme expanded in detail in a review of Andrew Hill’s presentation in Glasgow on potential dramatic savings to the NHS from future use of generic ARVs.

Many people believe that the potential for use of PrEP in Western countries will change in 2017 when TDF comes off patent. Generic TDF, with or without 3TC, could be commercially viable and individually affordable in the UK. Even with a 5-fold mark-up on current generic prices in low income countries, daily generic PrEP could cost less than £4 a week.

We report on two randomised European PrEP studies – PROUD and IPERGAY have both terminated the control arms based on DSMB-noted efficacy in the active arms. Although both studies are in gay men and transgender women, they show that PrEP can be highly effective in European countries.

These early results argue for prompt UK access to PrEP for people who otherwise are at high risk of becoming HIV positive next year. This same call is even made in the 2014 report on HIV in the UK from Public Health England, which we also review in this issue. HIV incidence in gay men reached a new high at 3250 diagnoses in 2013, many of which were likely to be recent infections, and 16% were in men younger than 24 years.

For HIV in the UK to benefit from both the impact of treatment as a prevention and PrEP, requires significantly reducing the percentage of people who are not yet diagnosed.

As the European testing week comes to a close as this issue goes to press, together with seasonal greetings for the upcoming holiday we need the New Year to make 2015 “the year of HIV testing”.