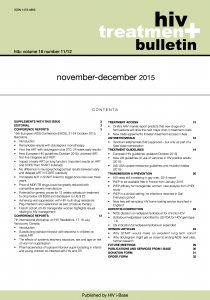 Given the dramatic developments during 2015, including START, PrEP and earlier treatment, the final issue of HTB for the year includes an appropriately exciting range of articles and news.

Reports from EACS 2015 include those from several START sub-studies with unexpected results – and later in HTB (in an opinion article) the case for extending follow up in START beyond 2017.

Two other reports from EACS look at reducing the cost of generic drugs for treating hepatitis C and MDR-TB in low- and middle-income countries.

EACS had surprising news from several independent research groups using dolutegravir as monotherapy (and dual therapy with 3TC) that hint at applications for dolutegravir’s unique drug resistance profile. While the early results generated some discussion at this conference, most people are waiting for more data before commenting.

We think the results are sufficiently important to discuss – in another opinion article – the implications of these early results for HIV positive people, including using dolutegravir monotherapy to revisit the concept of “drug holidays”. For people on complex multidrug combinations, reducing to a single small 50 mg pill each day that has minimal drug interactions or side effects – might improve  quality of life, even for six months each year.

New European treatment guidelines were launched at EACS that include ART at any CD4 count and the importance of PrEP. And other new guidelines include the UK recommendations on vaccinations in HIV positive people and the annual update to the drug resistance tables from IAS-USA.

Reports from the paediatric workshop earlier in the year describe new several antiretroviral studies in children, including switching to efavirenz and management of TB coinfection.

And as we went to press, a new four-in-one fixed dose combination was approved in both Europe and the US. Tradename Genvoya, this is Stribild with tenofovir alafenamide (TAF) – a compound whose development we have reported over the last three years –  substituted for tenofovir DF.

We review the latest Market Report from the Clinton Health Access Initiative (CHAI) that predicts that TAF will replace tenofovir DF globally once a generic version is available from 2018. Also that dolutegravir and 400 mg efavirenz are likely to dramatically reduce the cost of treatment (and improve standard of care) in low- and middle-income countries.

HIV prevention news in this issue is set against the latest HIV report from Public Health England showing increased rates of new infections – especially in gay men. We include new data supporting the use of PrEP and the news that France has just approved PrEP as part of its national health service for people at high risk of HIV infection.

PrEP is not expensive and the NHS should make similar provisions. Tenofovir will be off-patent in a year and potentially 6000 people might not become HIV positive in 2016.

Doctors are smart, they should be trusted to prescribe PrEP to people at highest risk of HIV who are not able to buy generic PrEP online.

Finally, with all this potential for change, i-Base would like to thank all contributors and partners who helped us produce HTB this year. We would also like to wish all readers our seasonal best wishes for the New Year ahead.