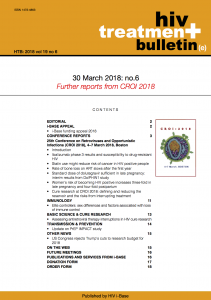 This is the second issue of HTB to lead with reports from CROI 2018, the main annual HIV scientific conference that was held this year in Boston.

We lead with results from the phase 3 ibalizumab study – the monoclonal antibody that was approved in the US during CROI, with an indication for multidrug resistant HIV.

One study, a retrospective analysis from data that is at least ten years old, quantified just how women were much more likely to become HIV positive during at the end of pregnancy or post partum, than at other times. A small pharmacology study provided reassuring results on dolutegravir levels during pregnancy.

Plus an overview of cure studies that includes new studies about treatment interruptions as part of cure research. See also the reviews by Richard Jefferys later in this issue for more discussion.

If you missed the previous HTB issue, those first reports are still online. And stay tuned for further news in April. CROI is a conference that keeps on giving…