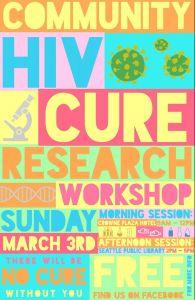 For several years, community advocates focused on cure-related research have organised pre-CROI workshops on latest developments in finding a cure for HIV.

Many of these activists have been reporting on HIV treatment for decades and their experience means that the programme also include leading HIV researchers.

This year the meeting had a larger presence on social media with web streaming of most talks. The morning workshop was held in a meeting room at a hotel close to the conference centre and the afternoon workshop was held at the Seattle Public Library to encourage involvement of both conference delegates and people who live in Seattle.

The meeting included an introduction by Carl Dieffenbach, Director of the Division of AIDS (DAIDS), and responsible for a $1 billion research budget and the chance to celebrate Timothy Ray Brown’s 12th anniversary of being cured (as the Berlin patient).

The agenda and presentations from this workshop together with videos of the talks are on the TAG website.
http://www.treatmentactiongroup.org/content/pre-croi-community-hiv-cure-research-workshop-2019

The first presentation – from Liz Barr from the Women’s HIV Research Collaborative and the ACTG – was of results from a survey of studies in the impressive TAG online database of 128 ongoing cure-related studies.
http://www.treatmentactiongroup.org/cure/trials

All studies were sent a short survey and just over half replied (72/128 with completed surveys and 7/128 declining to take part). Most respondents were from the US, many were from other countries or representing multi-country international studies. Of these, at least 32 include an analytic treatment interruption (ATI).  As most early studies are short, 69/72 are expecting to have results either during 2019 (38/72) or 2020 (29/72).

Demographic info was limited, perhaps because many studies were still enrolling, but as 113/128 of the studies in the database are phase 1 or 2 they will be exempt from federal requirements that participants reflect appropriate diversity in terms of sex and ethnicity.

With a caveat that the data is far from complete, ethnicity results from 39/72 studies (mainly US) included 52% white and 39% black participants. By sex, 82% of participants are men and 17% women – but this is likely to underestimate the percentage of men because an answer that said “mostly men” was assigned as 51%.  Many studies report 100% male participants.

Surprisingly, some studies (n=9) reported no obstacles to enrolling (a common challenge for nearly most research) while others listed having concerns about the type of intervention (n=21) or that there were no direct health benefits (n=15) as reasons given for not taking part.

Discussion after the presentation suggested future surveys could collect more information about financial incentives, treatment interruptions and an upper age limit that excluded people older than 65.

Consensus and disagreements between community and researchers

The second presentation, from Lynda Dee from AIDS Action Baltimore and the DARE collaboration, reported on discussions from a US community meeting held in July 2018 to develop discussions between community activists and researchers about trial design and related ethical concerns.

The meeting recognised a disconnect between researchers who understand that there is little chance of personal benefit for participants in their research and the participants themselves who are drawn to the hope they might be cured. One practical approach that was suggested was to not refer to “cure” in informed consent, where this is still commonly used, but to refer perhaps to drug-free long-term control, viral suppression off-ART or ART-free remission (though the use of remission is not supported by attendees at the meeting).

The need for ATIs was discussed as probably the most difficult ethical issue for cure-related studies – as they contradict HIV treatment guidelines that recommend remaining on ART. However, there is still consensus that there is currently no other option to measure interventions that are looking to maintain viral suppression without the need for ART.

There is with growing consensus on some entry criteria – including that current CD4 count >500 cells/mm3 on effective ART (viral load <50 copies/mL) is equivalent to a “healthy” HIV negative person. This in itself is a community achievement. However, while advocates argue for caution with a higher CD4 nadir of 350 cells/mm3 some studies still allow 200 cells/mm3.

Recent inclusion criteria also include having at least two active drug classes in case the ATI leads to drug resistance.

Two areas where less is less consensus include the criteria for restarting treatment, with community advocates preferring a lower viral load threshold and researchers wanting >100,000 copies/mL when the intervention is hoped to generate post-treatment viral control.

There was no agreement on whether PrEP should be provided in ATI studies. While there was 100% community support for including information about PrEP and also preferably access, the practical difficulties and costs of arranging this in the US meant most researchers see this as not being their responsibility.

A discussion on ethical concerns from approaches that involve gene editing was led by Karine Dubé from University of North Carolina and Michael Louella from defeatHIV. This talk focused on the recent use of CRISPR/Cas-9 in China to try to produce babies with the CCR5-d32 deletion that might offer limited further protection against HIV.

The ethical issues in this example included false informed consent, coercion of study participants, flawed justifications (there is no transmission risk when on effective ART), lack of previous safety results from animal studies and lifelong uncertainly for the two children who underwent these procedures. There were no peer-review input to the study design or results which were released on youtube.
https://www.youtube.com/watch?v=th0vnOmFltc

This study would have not been allowed in any other setting, but other ongoing research into gene editing are very carefully designed and controlled to meet good practice for both participants and researchers. These include ZFN editing (using own cells reinfused), TAL effector nuclease, CRISPR/Cas-9 (not yet in humans) and megaTals.

This session also included a discussion of a recent paper published in the Journal of Infectious Diseases that reported a case of heterosexual HIV transmission during an ATI in a French vaccine study. In addition to reporting oral sex as the transmission route (from an HIV positive man), the paper included numerous personal details for the people involved that were not required for medical and scientific concerns, and took a judgemental approach to this event.
https://academic.oup.com/jid/advance-article/doi/10.1093/infdis/jiz012/5344456

Some aspects of the case suggested that participants were improperly enrolled although a community discussion did include support for including a depression scale cut-off for ATI studies, so that more vulnerable participants are not included.

MMF to reduce the reservoir

The morning session concluded with a talk from Seattle-based researcher Joshua Schiffer who is running a small study funded by amfAR to see whether mycophenolate mofetil (MMF) could reduce the viral reservoir.

This hypothesis is based on modelling the dynamics of different cell populations that make up the viral reservoir based on the role that cell proliferation plays in maintaining the reservoir. MMF can target cell proliferation and is used to prevent GvH disease. Although there is significant risk of toxicity at higher doses, MMF is also is teratogenic in pregnancy.
https://clinicaltrials.gov/ct2/show/NCT03262441

This study is currently enrolling and plans to run for two years.

MMF was also used as an experimental addition to ART fifteen years ago as a potential booster for abacavir in the context of MDR HIV, and also in early infection, though without convincing evidence that it added benefit in either situation.

The afternoon session included talks on paediatric cure research, the international IciStem collaboration to support stem cell research and an overview on the importance of cure research in Africa.

Deborah Persaud from Johns Hopkins Children’s Center in Baltimore, discussed the differences between cure research in children compared to adults and included an overview of paediatric remission cases including the case of the Mississippi baby from 2013, and a review of ongoing research.

Monique Nijhuis from University Medical Centre Utrecht reviewed the potential for HIV to be cured by stem cell transplant and the work of the IciStem collaboration. This international research group has included developing an international donor database from cord and blood banks that has now identified more than 22,000 potential donors with delta-32 deletion. This group has also developed a database cohort of HIV positive people who have undergone HSCT or who plan to do so. So far, 39/45 people registered from nine countries have already undergone autologous transplants and 26/39 are still living. Median follow-up is >4.5 years and 19/26 are beyond the first year of transplantation. Although most patients received transplants with wild-type cells, nine cases had donors with CCR5 d-32 deletion and 4/9 are still alive.

The complexities of myths and misconceptions about the HIV cure in Africa were discussed by Moses Supercharger, a Uganda activist who is also a member of the International INSIGHT community advisory board. This included the practical urgency for HIV positive people to limit dependence on international funding for medications, especially given the threats of changes in US political priorities. It also looked at the need for better ART in settings where the benefits or ART are often undermined by false claims of herbal cures.