Continued benefits from protease inhibitor based therapy despite virological failure

The continued benefit for some patients derived from using less than maximally suppressive combinations, usually because other treatment options have been exhausted, was shown in this study to be likely to be due to a complex interaction of drug pressure, viral fitness and immune response.

Steven Deeks, from University of California, San Francisco, presented an analysis of 20 patients on stable virologically failing (viral load persistently > 500 copies/ml > 12 months ) protease-containing combinations who were followed for a median of 2 years in a longitudinal observational study. Patients were monitored every 3-6 months and drug susceptibility and replication capacity was evaluated using a recombinant virus based assay (PhenoSense, Virologic). Pre-therapy baselines were established from medical records.

The study also assayed HIV specific immune responses using a CD28 antibody with inactivated wholeHIV MN as antigen and cells were stained for CD4, CD69 and intracellular cytokines and analysed by flow cytometry.

A summary of the results is shown in Table 1 below.

All figures are median with interquartile range

It is notable that over this two year observation period there was no significant change in either CD4 or viral load levels (p>0.2, signed rank) compared to pre-therapy baseline and that CD4 count actually continued to rise and viral load decline slightly over the study period. However phenotypic resistance increased over time (from a median 3.9-fold to 31.1-fold) with PI susceptibility increasing by a median of 1.76-fold per month, p=0.0001). Replicative capacity relative to wild-type during early failure was 0.31 units/month (IQR 0.21-0.39) and tended to decrease over time (although not reaching statistical significance).

HIV specific CD4 responses were present in 10 of the patients evaluated (3 weakly positive and 7 strongly positive). These responses were measured at the last study visit after a median of 38.7 months of virologic failure (and are largely undetectable in either untreated or maximally suppressed patients).

This study raised more questions than it answered and shows the importance of closely following patients in all situations. There has generally been very little research presented on patients in this situation and this study provided a broader understanding of the complexity involved. Delayed virological rebound to pre-treatment levels has previously been explained by reduced viral fitness and has been seen as providing a time-limited benefit that will not be sustained in the long term, for people who have no other treatment options available. This caution is supported by the increase in phenotypic resistance shown in this study. However, given the risks linked to stopping treatment altogether, shown for a significant proportion of people in STI studies, continuing treatment while waiting for new agents may well be the safest approach. 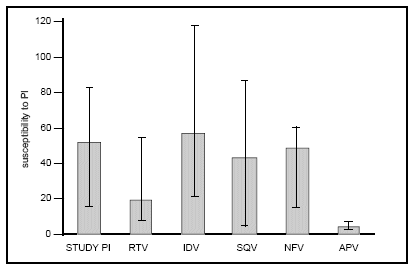 Benefits of continued PI containing regimens in the face of virological failure has been reported in the EuroSIDA study. This appears to be true even for patients with both immunological and virological failure (CD4 <50 cells/mm3 and VL >100,000 copies/mL).