By Ash Kotak, playwright and film-maker 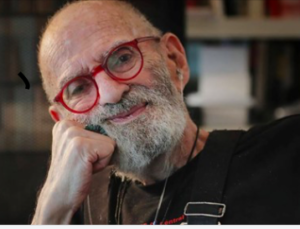 Anyone who says one man cannot make a difference never met Larry Kramer, the playwright, author, essayist, screenwriter and activist who has died of pneumonia at the age of 84.

Bold, unpredictable, angry, articulate, a revolutionary with a sharp tongue but a surprising streak of tenderness, he stirred many to action as a co-founder of Gay Men’s Health Crisis (GMHC) in 1982 and the AIDS Coalition To Unleash Power (ACT UP) in 1987.

Born in 1935 into a downwardly mobile Jewish family, Kramer was full of contradictions: a self-proclaimed loudmouth, he wrote with astonishing sensitivity.

He began his career writing for movies, winning an Oscar nomination in 1969 for director Ken Russell’s “Women in Love”, which he also produced. But he is probably best known as the author of the autobiographical Tony Award-winning play “The Normal Heart” about Ned Weeks, the founder of a gay advocacy group in early 1980s New York, which opened in Manhattan in 1985.

There have been more than 600 productions worldwide since, including a version staring Hollywood actor Martin Sheen in 1986 at London’s Royal Court theatre. It later aired on HBO in 2014, having been adapted by Kramer, starring actors Mark Ruffalo and Julia Roberts.

His other works included a 1992 sequel, “The Destiny of Me”, a finalist for the Pulitzer Prize for drama, which continued Weeks’s story as he took part in an AIDS drug trial in the early 1980s whilst flashing back to the protagonist’s early 1950s Jewish upbringing. The play won two Obie Awards.

In 1996, Kramer gained the American Academy of Arts and Letters Award for Literature.

“Faggots”, published in 1979, proved to be his seminal novel. Deeply critical of the hedonistic lifestyle of gay men at the time – a constant whirl of drugs and sex – it provoked a firestorm among the LGBT+ community, before the advent of HIV/AIDS revealed the novel’s prescient view of a section of society out of control.

But in his focus predominantly on white, gay men with AIDS, Kramer failed to fully grasp the issues faced by other communities at the epicentre of the pandemic: people of colour, the poor, the marginalised and women worldwide.

Yet he remained a powerful voice calling for greater recognition of the impact of HIV/AIDS worldwide.

His 5000-word essay, “1,112 and Counting”, published on March 14, 1983 on the front page of The Native – New York’s only significant gay publication at the time – caused just the stir he wanted. It was a wake-up call born out of his rage at the lack of serious attention paid to the crisis.

Kramer’s targets were wide and many: healthcare professionals, scientists, the then US President Ronald Reagan, the closeted New York mayor Ed Koch. However, the gay men who represented the majority of deaths from AIDS-related illnesses were not absolved from criticism.

His anger was palpable. Three presidents stood accused of being “murderers” – Reagan, George Bush Snr and Bill Clinton. Others felt the full force of his rage, including the current COVID-19 tsar, Anthony Fauci, then director of the National Institute of Allergy and Infectious Diseases.

Without doubt, Kramer’s voice and call to action saved hundreds of thousands of lives. He himself was diagnosed HIV-positive in 1988 and also with liver damage due to hepatitis B. He underwent a liver transplant in 2001 after causing a stink having been refused one due to his status.

And he never stopped fighting.

At the Reclaim Pride 50th anniversary of Stonewall event in Central Park in New York last summer, he upset the crowd by saying that they had failed the AIDS and the LGBT+ movement. He was furious that the hedonism had returned and the horrors of “the gay holocaust” and the memory of the dead was being so quickly ignored by a younger generation hooked on power, drugs and casual sex.

And his response to the novel form of coronavirus was typical: a new play, “An Army of Lovers Must Not Die”, is likely to keep his fiery rage burning long after his death.

Ash Kotak is a playwright and film-maker and leads the #AIDSMemoryUK Campaign to establish a national tribute to HIV and AIDS in Britain. This was first published by Openly Thompson Reuters Foundation.

Amfar: Larry Kramer: the most powerful voice on AIDS
https://www.amfar.org/Larry-Kramer