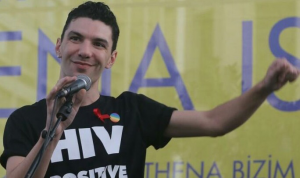 On 3 May 2022, the two men who killed 33-year-old LGBTQ activist Zak (Zacharias) Kostopoulos were given ten year sentences in the Athens lower court.

However, Greek penal code is likely to mean that the eldest of these men might only serve 2.5 years that will be served at home. [1, 2, 3]

Zak was an HIV positive, sex positive, queer, human rights activist and defender, also raising awareness performing as drag queen Zackie Oh. He was brutally assaulted in September 2018 and died as a consequence of the beatings. [4]

The four police officers, who were charged with deadly bodily harm because they handcuffed Zak face down even though he was already unconscious, were acquited.

Numerous LGBTQ and human rights protests have been help demanding justice for Zak.

His family, friends and the wider community have decried the verdict.

An immediate community response include a protest against the verdict and a procession in memory of Zak was attended by over 1000 people in central Athens. [5]