The natural history of HIV without ART 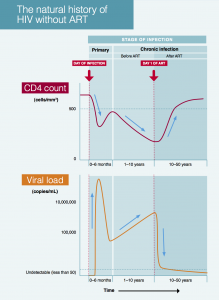 The natural history of HIV refers to what happens after infection before ART is used.

It is explained by results from two blood tests: the CD4 count and viral load.

The CD4 count is a marker of how much HIV damages your immune system. Without ART, CD4 counts steadily go down over time in most people.

Viral load shows how much virus is circulating in the body, measured in blood. Without ART, viral load steadily goes up over time.

There are two main phases of HIV infection.