The natural history of HIV in detail 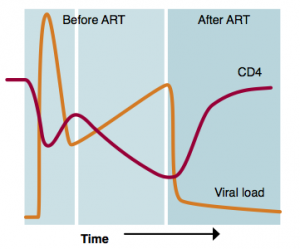 During this period, HIV and the immune system are engaged in a very active battle.

A modified CD4 test called RITA (or STARHS) can show whether infection is likely to have been within the previous 4 to 6 months.

There are many potential advantages of starting ART during this early period. During this window period, each month or week or day earlier might be associated with benefits. Very early treatment overlaps with cure research. The chance to use ART in early infection is therefore an important individual choice. See HIV reservoir and cure research.