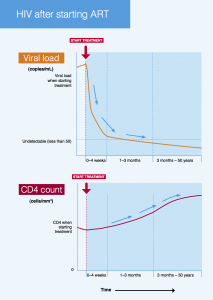 ART starts to work with the very first pill.

Viral load then continues to drop over the next few months.

Many people become undetectable within a month and most within three months. The time taken partly depends on the choice of ART. Integrase inhibitors reduce viral load faster than other HIV drugs. Guidelines increasingly recommend integrase inhibitors when starting ART.

How quickly viral load becomes undetectable will also depend on how high viral load was when you started treatment.

Starting with a viral load count above 100,000 copies/mL might take three months to become undetectable.

More rarely, if viral load starts in the millions, it might stay stable at low levels (between 50 to 200 copies/mL) for over a year. So long as this doesn’t get higher, there is no need to change ART. [1]

As ART wipes out most actively infected CD4 cells, the immune system then has chance to recover naturally.

Because there is much less virus, the immune system slows down production of excess CD4 cells.

Stopping this overproduction is a good thing.

HIV drugs do not directly increase the CD4 count, but they help make an environment where this can happen. ART enables the CD4 count to increase to higher and safer levels.

In contrast to viral load, CD4 usually increases more slowly and steadily. The biggest rise occurs during the first 6–12 months and this continues over the second year. Reaching a CD4 count above 500 is referred to as normal, but even if it doesn’t reach this high, the risk of HIV-related complications is dramatically reduced.

Once on stable ART, so long as adherence is good, the same combination can last for years. CD4 counts can also continue to increase each year, even after ten years.