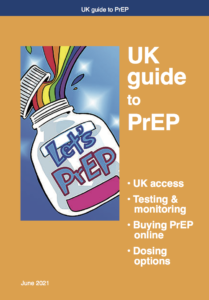 PrEP is a pill taken before sex, so it is pre-exposure. Prophylaxis means to prevent infection. So you can use PrEP to greatly reduce the risk of becoming HIV positive.

A newer version using tenofovir alafenamide (TAF) instead of TD is only approved in the US, and only for men and trans women. The application for approval in the EU was withdrawn for financial rather than medical reasons.

TAF-based PrEP is not often used by the NHS as TD is so safe and effective for most people. A generic version can be brought online for personal use.

A two-monthly injection of cabotegravir as PrEP is also approved in the US, but not yet in Europe.

In December 2021, PrEP studies of a monthly oral pill and a yearly implant (both using islatravir) were put on-hold.