It means that an HIV positive person on ART with an undetectable viral load cannot transmit HIV even if you do not use condoms.

Sometimes this is also called TasP or Treatment as Prevention. 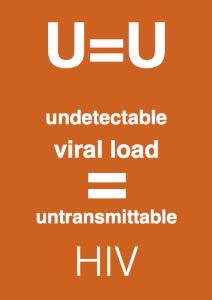 Since 2016, the global U=U community campaign has focused on Undetectable = Untransmittable.

Your doctor should talk about this.

It works because ART reduces HIV to levels that are too low to be infectious.

This was known in 2001 for heterosexual couples. In 2008, a group of Swiss doctors said that they believed this risk to be zero in a paper called the Swiss Statement. The doctors were sufficiently sure that they said it was safe to have a baby this way, if the man was positive and on treatment and the women was HIV negative.

Then in 2014, the PARTNER study reported no linked HIV transmissions after 900 couples had sex more than 44,000 times without condoms.

In 2018, an extension of the study called PARTNER 2, provided even more evidence from gay couples.

In the UK, 98% of people who have been diagnosed HIV positive are on ART. Of these, 97% have an undetectable viral load.

This evidence should reduce the worry and anxiety for couples where one partner is positive and the other is negative, even if they still choose to use condoms.

It should also help reduce fear and stigma about HIV.