This page is part of Pocket ART, an easy guide to HIV treatment.

The PARTNER study reported zero HIV transmissions from a positive partner on ART to their negative partner.

This was after couples in the study had sex more than 58,500 times without using condoms.

Detailed report of the PARTNER results.

This was after almost 800 gay couples had sex more than 77,000 without condoms.

Together, these studies contributed to the evidence that support U=U. This means there is zero risk of transmitting HIV when viral load in undetectable. 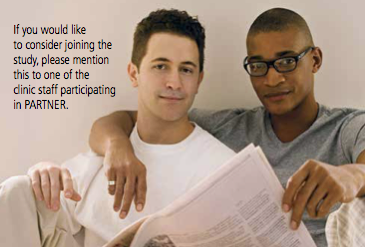 PARTNER 2 continued PARTNER but only in gay men.

PARTNER 2 included many UK sites. The study quantified the risk of HIV transmission in serodifferent couples where the HIV positive partner is using HIV treatment.

Even though the orignial PARTNER study was open to all serodifferent couples, the PARTNER 2 study in now focused only on gay men.

Condoms are a safe and effective way to protect against transmission. But condoms can break or slip off and that not everyone uses a condom every time.

PARTNER 2 is for partnerships where the positive partner is on ART and when they do not always use a condom when having sex. The study is also looking at why condoms are not always used.

The original PARTNER study enrolled both straight and gay couples. The first results were presented in 2014. Theses results were published in 2016.

Since then the PARTNER study closed and an extension called PARTNER2 enrolled almost 1000 gay couple to get the same level of evidence for gay men.

Enrolment criteria (this study is now closed and completed)

To join the PARTNER 2 study you needed to have been a gay couple with the following.

For more information ask your doctor or HIV clinic, or contact the i-Base phoneline.