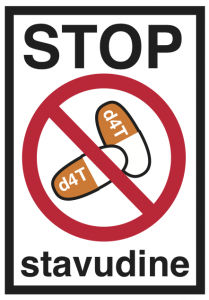 On 14 December 2011 a group of prominent treatment activists from South Africa, Europe and the USA took the unusual step of contacting funders of a proposed international study. [1]

In writing to the Bill and Melinda Gates Foundation, the group were advocating against the proposed financial support for continued research into the use of the nucleoside analogue d4T (stavudine), even at the proposed lower 20 mg dose. [2]

Stavudine has long been discontinued in Western countries due to an unacceptably high risk of serious side effects in comparison to alternative drugs in the same class.

The letter argues strongly against this research and was concerned that previous meetings with representatives from the Foundation had not been formally answered. It argues for a focus on increasing access to safer cost-saving alternatives to d4T, not on seeking a comeback for a drug virtually abandoned in rich countries.

The objections, summarised from the letter, include:

In 2004, d4T was removed from the list of preferred first-line antiretroviral drugs recommended by the US Department of Health and Human Services (DHHS). [3]

Starting in 2006, the WHO recommended that countries start moving away from d4T, and in 2009 recommended that the drug be phased out in first-line antiretroviral treatment (ART) programmes. [4]

In 2011, the European Medicines Agency (EMA) revised the indication for d4T, noting, “…that the use of the medicine should be severely restricted in both adults and children… Prescribers are reminded of the severe side effects seen with Zerit [d4T] and should only use the medicine when other appropriate treatments are not available. Patients being treated with Zerit should be assessed frequently and switched to appropriate alternatives as soon as possible.” [5]

Evidence of d4T’s toxicity in an operational setting has been reported from studies in Lesotho [6] and South Africa. [7]

The cost of these side effects will significantly reduce price savings

MSF report higher inpatient care and essential drug costs were higher for people on d4T than those on tenofovir. In Lesotho, the tenofovir-containing regimen generated higher life years and QALYs than AZT or d4T-based treatment. [9] As the costs of tenofovir and especially efavirenz drop, the cost benefit to patients and to health systems will become clearer. Since the study was completed, the global best price of efavirenz – which partly drives tenofovir costs – has almost halved ($97 ppy in 2009 to $52 today).

d4T’s long-term toxicity will not be studied

The proposed 20 mg d4T dose might be acceptable in a short-term 48- or even 96-week virologic endpoint study (although Bristol-Myers Squibb studied and rejected 20 mg BID). But, because mitrochondrial toxicity is both dose and time dependent, many of d4T’s most serious side effects (such as peripheral neuropathy and lipoatrophy) would not necessarily emerge until after such a study was completed. This study does not include monitoring of surrogate markers for mitochondrial toxicity, so it cannot shed light on the incidence of this serious adverse event.

This trial will not therefore be able to answer the primary policy question which drives it – whether long-term 20 mg d4T BID is as good as tenofovir QD in first-line ART regimens for use in public health programmes in resource-limited settings.

Potential savings may be out-dated when the study ends

The rationale for this trial is to lower treatment costs but the price of alternatives, notably tenofovir, has come down dramatically in the last several years, and is expected to decrease further as demand increases. According to MSF’s annual ARV pricing report, tenofovir is now cheaper than AZT, with the price of single-drug tenofovir having decreased by 52% from 2008 to 2011, and the price of the triple fixed-dose combination of tenofovir, lamivudine and efavirenz having decreased by 53% to US$173 per person per year over that same time period. [12]

The proposed study will not have 96-week results before 2014, and will need perhaps five-year field effectiveness trial to determine longer-term tolerability.

The anticipated cost savings associated with d4T could easily be overtaken by expected further price reductions for tenofovir. Currently a one-pill-once-a-day regimen containing efavirenz and tenofovir costs roughly half of what d4T-based combinations cost when they was first introduced a decade ago.

Potentially greater savings could be achieved if the tenofovir prodrugs in development with both Gilead and Chimerix are approved. A recent announcement by Gilead of an agreement with Tibotec to develop an FDC of darunavir, emtricitabine, GS 7340 and cobicistat with “less than one tenth of the amount of the 300 mg of tenofovir disoproxil fumarate contained in Viread and Truvada” suggests that this is feasible. [13] Low milligram dosing (and therefore low potential cost) is also used for the integrase inhibitor dolutegravir (50 mg once daily).

The letter can be read in full on the TAG website:

In the short time since the letter was distributed two further publications has supported caution into further use of d4T. Vichet Phan and colleagues published data on rates of severe d4T-associated toxicity in a cohort of patients in Cambodia, with 7% of people having neuropathy within the first years and a cumulative incidence of lipoatrophy of 56% by 3 years and 72% by 6 years. [14]

Further concerns from people directly affected by continued use of d4T, the Malawi Network of People Living with HIV/AIDS (MANET+) held a press briefing concerned by the slow pace for phasing out current use of this drug in Malawi. Despite the funding crisis the Malawi government has a priority for this to be completed by June 2012. [15]

It is unclear why the Gates Foundation considers this study to be a priority and it seems an aberration in an otherwise carefully considered strategy for supporting research into the optimisation of ART for resource limited settings . This includes the ENCORE 1 study of low dose efavirenz, the reformulation of tenofovir to increase its bioavailability (working with CHAI) and the development of innovative potentially long acting formulations.

As Bad Science’s Ben Goldacre wrote: “Why is the Gates Foundation supporting this trial of a rubbish AIDS drug?”. [16]