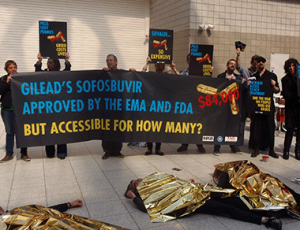 A community-led protest that took place at the European Liver Conference was notable (and newsworthy) for apparently being the first time that a demonstration had been held at a medical liver conference. [1]

The action was to protest against setting the US price of the newly approved hepatitis C (HCV) drug sofosbuvir at $1000 a day. [2] 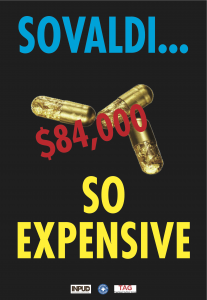 This price is also likely to limit access to sofosbuvir in the UK and other European public health systems to people with the most advanced liver damage, and perhaps to those who have already not responded to less effective and less tolerable older treatments.

Tens of thousands of people in the UK, who could easily be cured of HCV with a short course of easy-to-tolerate oral meds, will now be told they are not sick enough yet for the best treatment. People who want to treat their HCV may be only be offered what are now clearly older sub-standard treatments.

Sovaldi, so expensive: an unethical model for pricing

The standard model for pricing a new drug is to cover research and development costs, to allow for future research to keep the company active and to compensate commercial investors. Although research budgets are never publically disclosed, and the price also has to fit the market, this is a model that supports both continued investment and future research.

In a new approach, the price for sofosbuvir has been justified by adding up the expected LIFETIME health costs that could potentially be saved. This includes years (potentially decades) of appointments, doctors visits, monitoring tests and scans – through to cost of less effective treatment; and finally hospitalisation, liver transplant and subsequent aftercare.

Gilead want to charge all these costs, up front, irrespective of how many people need treatment and whether this is affordable to the health system. This model makes no mention of people who drop out of care, who can’t access care, or who die before they access treatment.

This model is unethical and the company should be challenged for suggesting it is fit for purpose.

On 16 April 2014, NHS England announced that £18.7 million would be made available for sofosbuvir treatment for 500 people. [4] This was based on a decision that individual treatment is cost effective, even at this price. But in the UK, 216,000 people are estimated to have chronic HCV, and treating only half these patients would cost £ 3.8 billion (the total drug budget of is £10 billion [5]). The price needs to affordable to healthcare systems in order for people to access treatment (see Table 1).

Sofosbuvir is not an expensive or particularly complex drug to manufacture. A well-publicised study by Andrew Hill and colleagues into the manufacturing costs for sofosbuvir and other new hepatitis C drugs, estimated that a 12-week course of treatment should cost no more than US $150 (less than £1 per pill). [6]

Gilead has not yet challenged the figures from this analysis.

This makes for a very expensive “film-coating”.

A similar model matching need to available budget is needed in other countries, especially for middle-income countries which have the greatest HCV burden.

On 22 March 2014, Reuters reported that Gilead had agreed to sell sofosbuvir for use in Egyptian government clinics at $900 for a 12-week course. [7] This may sound reasonable – or even generous: it is a 99% reduction on the US list price.

Approximately 12 million people in Egypt have chronic hepatitis C. It has the highest global prevalence at 14% of the general population. Even at the discounted cost of $900, treating half of the people with HCV would cost US$ 5.4 billion. This is more than twice the entire 2011 Egyptian health budget. [8]

In the US, 3.2 million people are estimated to have chronic HCV, even treating half of them would cost US$134 billion. This is approximately one-eighth of the US health federal health budget for 2014. [9]

Although Gilead purchased the biotech company Pharmasset in November 2011 for $11 billion dollars, principally to acquire rights to sofosbuvir, much of that investment has already be recouped from the increase in the company’s stock price which has more than doubled.

In the first three months of 2014, Gilead announced product sales of US$ 4.8 billion with US$ 2.2 billion coming from sobosbuvir. [10]

But the same profits could be made by setting a much lower price to enable more people to benefit from this drug. If profit is the important bottom-line for both the company and investors, this could still be achieved. Instead, Gilead is even holding people in rich countries to ransom. The price restricts health payers from being able to offer treatment to only a tiny margin of people who need treatment. See Table 1.

Globally, 150 million people have acute HCV. The five countries with the highest numbers of people living with HCV are China (29.7 million), India (18.2 million), Egypt (11.8 million), Indonesia (9.43 million) and Pakistan (9.42 million). This is where the majority of the 500,000 HCV-related deaths each year occur. This drives the community demand for setting a target price of US$ 500 goal in low and middle-income countries – for a package that covers testing, treatment and cure HCV. [11]

The scientific and medical advances now offer the potential to eradicate HCV, but the current price and plans for access makes this impossible.

* Costs are based on current prices, including 99% reduced price in Egypt and using 12 weeks treatment.

NEJM: price “as breathtaking as their effectiveness”

An editorial in the New England Journal of Medicine, written on the predicted costs of the new oral hepatitis C drugs (as they will need to be used in combination) stated that the predicted prices were “as breathtaking as their effectiveness”.

In a commentary to support the publication of several important Phase 3 studies of new hepatitis C drugs, including sofosbuvir, it highlighted that as the medical barriers to treatment disappear, they are blocked by economic ones – even for wealthy countries like the US, concluding that “Costs alone cast a pall over the stunning success in achieving the long-hoped-for goal of a safe and effective therapy for hepatitis C”. [12]

Shareholders should be ashamed. They could make similar profits from treating a greater percentage of the population who need treatment.

Activists at the demonstration in EASL seemed to have no difficulty handing out leaflets, even though liver meetings are generally conservative events. More importantly, the response from most of the doctors, from a wide range of countries, was both supportive and encouraging. A common theme was “these drugs are too expensive, I will never be able to prescribe them”.

The UK should not be satisfied with treating a few hundred people when the potential to eradicate hepatitis C is being withheld.