Grassroots demand grows for early access to PrEP in the UK 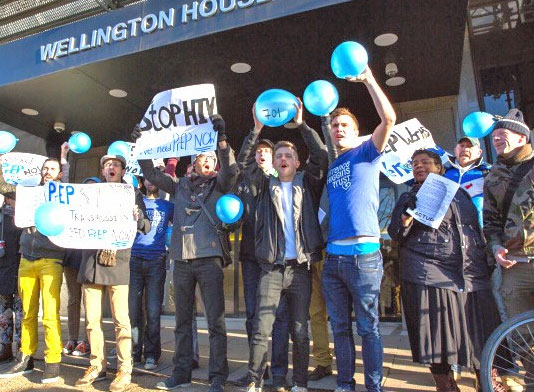 In November 2014, a community statement calling for wider access to PrEP highlighted the importance of early results from the UK PROUD study that had been released the previous month. [1]

By 21 January 2015, the statement (printed below) had collected more than 1280 individual and organisational supporters.

The document was drafted by six HIV community organisations to update an earlier community statement in support of the PROUD study, and to reflect the recent results showing that PrEP works for gay men in the UK who are at high risk of HIV. PrEP involves taking a single daily pill containing two HIV drugs, which with good adherence is likely to have >95% efficacy.

The NHS advisory group working on access to PrEP, were also met with a lively demonstration organised by the direction action group ACT-UP London, some of whose members are participants on the PROUD study. [2]

The ACT-UP statement called for immediate access, highlighting that with 500 people are diagnosed with HIV each month in the UK, none of whom have access to PrEP.

Activist Seán McGovern said the two-year wait was unacceptable: “We already know that PrEP is highly effective in stopping infection when taken correctly – and yet in the UK only the 545 study participants are currently able to take it. There were 6,000 new HIV diagnoses in 2013 alone. Each year that we wait means consigning a huge number of people to infections that could be prevented.”

Currently, access to PrEP through the NHS is restricted to participants in the PROUD study.

The early efficacy results in PROUD led to a change in the study design, offering immediate PrEP to all participants. [3] More detailed results are expect to be presented in February at the Conference of Retroviruses and Opportunistic Infections (CROI), together with results from the French IPERGAY study. [4]

Statement on PrEP from community organisations working on HIV prevention

Two European studies of pre-exposure prophylaxis (PrEP), PROUD (i) and IPERGAY (ii), reported early results in October 2014. Both studies showed that PrEP was so effective at preventing HIV transmission that everyone in these studies has now been offered PrEP. The comparison arms, which respectively offered delayed PrEP or a placebo, have been closed.

In light of this news, together with data on continued high rates of new infections (iii), the NHS urgently needs to make PrEP available.

Although an NHS England process to evaluate PrEP is underway, any decision to provide PrEP will probably not be implemented until early 2017, which is too long to wait.

We are calling for earlier access to PrEP. The NHS must speed up its evaluation process and make PrEP available as soon as possible. Furthermore, we call for interim arrangements to be agreed now for provision of PrEP to those at the highest risk of acquiring HIV.