Starting HIV treatment at high CD4 counts protects against both AIDS and non-AIDS events: overall and in subgroup analyses of START study

The international START study produced headline news at IAS 2015 that confirms benefits from starting antiretroviral treatment (ART) at CD4 counts above 500 cells/mm3. The study also reported no upper CD4 threshold that was protective against AIDS-related events, even though the overall absolute risk of events in START was low. 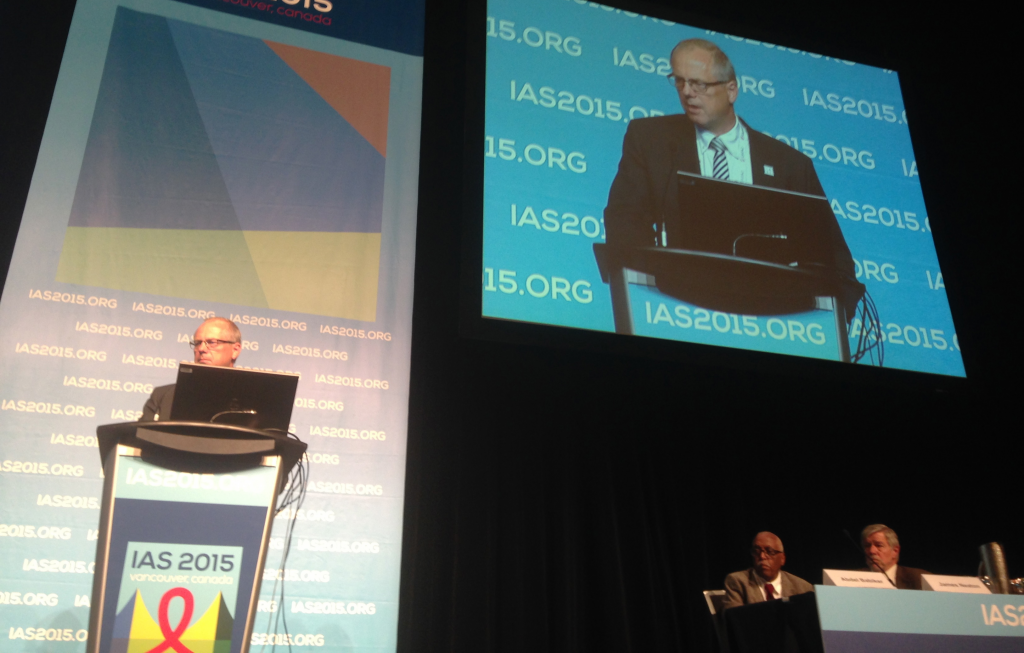 Professor Jens Lundgren presenting ground-breaking results from the START study, with other key members of the study team, Abdel Babiker and Jim Neaton at lower right.

The START study is notable for reporting results 18 months ahead of schedule, following a recommendation by the study’s independent Data and Safety Monitoring Board (DSMB) in May that participants in the arm deferring ART until their CD4 count reached 350 cells/mm3 should be offered immediate treatment, and that follow-up should continue as planned for both arms.

The results were presented by Professor Jens Lundgren from University of Copenhagen on behalf of the START study team in two sessions at the conference: an opening plenary on the first day and the International AIDS Society members meeting later in the programme. [1, 2] The study was also simultaneously published online in the New England Journal of Medicine. [3]

This HTB report combines results from both IAS 2015 and NEJM paper.

Although preliminary findings were released on 27 May 2015 based on the dataset used for the DSMB decision, the expanded results cover three key areas:

From December 2009 to December 2013, START randomised 4685 HIV positive treatment-naive adults with CD4 counts >500 cells/mm3 to either an immediate (IMM) or deferred (DEF) ART, with the deferred group waiteing until their CD4 count reached 350 cells/mm3.

The combined primary endpoint included AIDS related and non-AIDS related complications including grade 4 events and deaths from any cause.

By 26 May 2015, 98% vs 48% of the IMM vs DEF participants had started ART (at median CD4 count of 651 vs 408 cells/mm3 respectively). Although ART in the study was provided free from a central repository, and included the choice of all or nearly all approved drugs, the majority of patients in both arms used tenofovir/FTC as background NRTIs (approximately 90%). Efavirenz was the most widely used third drug, by 73% and 51% of the IMM vs DEF arms respectively, with atazanavir/r, darunavir/r, rilpivirine and raltegravir making up the majority of other combinations. The study reported high rates of viral suppression with 98% vs 97% of those on treatment having <200 copies/mL at month 12.

An unexpected outcome in START is the degree to which AIDS events were more common at high CD4 counts than non-AIDS events. Throughout the study, the greatest impact of early ART was expected to be reduced inflammation-related events. Also, consistent with the planned study design, only 4% of follow-up time in the deferred arm occurred at a CD4 count <350 cells/mm3 and accounted for only 5 primary events.

Earlier treatment had better outcomes in both high and low/middle income countries, although there were differences in the type of events by geographical region. Most of the TB cases (16/20) were in Africa and most of the cancers (22/27) and cardiovascular events (19/26) occurred in Australia, Europe, Israel and the US.

Another unexpected outcome from START was the consistency for the primary endpoint results in sub-group analysis for baseline demographics and other risk factors of serious events, all favouring the early treatment arm.

The expectation that events would only occur in the groups at highest risk and that lowest risk groups would be protected from events was not supported by the results.

This included analyses by age, sex, race, geographic regions, smoking status, cardiovascular risk or baseline CD4 and viral load. Even when 95%CI for the HR crossed 1.0 for several parameters (highest CD4 and CHD risk and lowest VL), none of the p-values for the interaction approached significance. See Table 3.

* Although the individual 95% CI crossed 1.0 for these categories the p-value for trend for the subgroup was not statistically significant.

In conclusion, START results support the importance of providing ART for all HIV positive people.

They reinforce the need for further research to understand the pathogenesis of HIV in early infection and the urgency of achieving funding to ensure universal ART becomes a global reality.

Simon Collins is a member of the Community Advisory Board (CAB) for the START study.

START has produced a dataset that defines level of risk for not using ART, irrespective of any individual decision to start treatment. The level of confidence for doctors recommending early ART will now increase, even if the scale up issues for universal treatment when global coverage has not yet met this based on CD4 thresholds of 500 or even 350 cells/mm3.

Earlier treatment was already recommended in guidelines due to the impact that ART has on dramatically reducing the risk of onward transmission. However, START demonstrates the key missing evidence that this approach also produces clinical benefits for the person taking treatment.

These results are expected to change treatment guidelines globally. UK BHIVA guidelines have removed CD4 threshold as a criteria for starting ART in the 2015 draft. [6]

At IAS 2015, WHO announced that the updated 2015 guidelines will also recommend treatment for all HIV positive people. [7, 8]

Follow up for all participants continues until at least the end of 2016 but the unique nature of this group would also support a further extension.