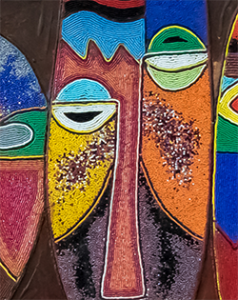 Malawi began Option B+ (universal lifelong ART for pregnant and breastfeeding women) in 2011, which led to a rapid scale up of women accessing ART irrespective of CD4 count.

Since then the Malawi programme has matured and Treat All has been adopted for all populations including pregnant women – both nationally and in WHO guidelines. As with non-pregnant adults, pregnant women receive a first-line ART regimen of efavirenz/tenofovir DF/lamivudine (EFV/TDF/3TC).

The 11th INTEREST Workshop – also conducted in Malawi – included a number of posters from studies designed to monitor and evaluate various aspects of the programme including: ART uptake, retention in care, long-term safety, treatment failure, and maternal and infant adverse events and outcomes.

These are: The National Evaluation of Malawi’s PMTCT programme (NEMAPP), PROBE (PMTCT Retention of Option B+ Evaluation) study and The Option B+: ART Safety and Durability during First and Subsequent Pregnancies research study at Bwaila District Hospital in Lilongwe.

NEMAPP is a two-year longitudinal cohort study across 54 health facilities, started in November 2014, using two-stage cluster sampling to evaluate infants at 4-12 weeks of age. Mothers attending an under-5 clinic were tested for HIV and HIV-exposed infants received DNA testing at baseline, 12 and 24 months.

Mothers had low mortality and morbidity at 4-26 weeks postpartum associated with increased ART uptake in asymptomatic women in an analysis of maternal health in NEMAPP. [3]

In a nested cohort study including 580 women, their health status at enrollment was: 94% normal, 3.6% minor illness not affecting normal activities and 0.7% major illness needing daily assistance. Of the 580 women 56.2% had CD4 >500 cells/mm3 and 71.9% undetectable viral load.

Limited evidence suggests that vertical transmission prevention outcomes in young and adolescent women are worse than for adult women. [4]

Accessing ART in health centres, being asymptomatic and treatment literacy were associated with high ART uptake. [5] But after starting treatment, neither of these predictors were associated with default or transferring to another health facility, according to a national assessment of Option B+ outcomes.

This was a secondary data analysis of the PROBE study. PROBE was a retrospective cohort of women attending antenatal clinics. The main variables in the study were: women coming for a second routine visit (uptake) and default and transfer out (outcomes).

The investigators noted that after starting ART the risk of either defaulting or transferring to another facility was not significantly associated with any predictor.

Of 299 newly diagnosed, ART naive pregnant women enrolled in the prospective observational study from May 2015 to November 2016 at Bwaila Hospital, 35 (12%) were lost to follow up, including 9/35 before delivery. [6] Being unmarried and in a newer relationship were associated with loss to follow up.

The study defined loss to follow up as missing after 90 days from last documented visit, excluding those that died. A trained community liaison was informed of all missed visits and traced the participants physically or by phone until they either found them or had made three attempts to do so.

At enrollment participants were a median age of 26 years (IQR 26-30) and the majority were married (89%) and/or had been in the relationship for one year or more (77%). The median follow up was 11 months (IQR 8-14). Three died during the study. Of the participants lost to follow up 6/35 (17%) were brought back into care after they were traced.

Although being unmarried and in a newer relationship were associated with loss to follow up the investigators added that this is not exhaustive. It is important to identify women undergoing socio-economic as well as treatment related risk factors to ensure that women are maintained in care and ART during pregnancy and beyond.

High rates of unintended pregnancy and low rates of contraception

Like many African countries that adopted Option B+ by 2015, Malawi has high fertility rates and infrequent use of contraception. An analysis of pregnancy intentions of women enrolled in the programme revealed extremely high rates of unintended pregnancies and low rates of contraceptive use. [7]

This prospective study included the 299 newly diagnosed, ART naive pregnant women in the cohort described above and 427 who had been receiving ART for six months or more.

The newly diagnosed women were: younger than those already receiving ART (26 vs 31 years); had been in a relationship for shorter time (5 vs 7.6 years); were less likely to have an HIV positive partner (11 vs 59%); and had fewer living children (1.8 vs 2.3), all p<0.05. Newly diagnosed women also had shorter travel time to the clinic. Similar proportions were married (88 vs 92%) and reported physical or verbal abuse (17 vs 15%).

Overall 76% of women in the programme reported an unintended pregnancy and only 18% used any contraceptive method. “This highlights the missed opportunity to engage these women in family planning and suggests shortfalls in the integration of ART and family planning under Option B+ in Malawi”, the investigators wrote.

Unsurprisingly women in the cohort with longer duration of ART during pregnancy had lower risk of unsuppressed viral load at delivery. [8]

Women are frequently diagnosed with HIV and start ART late in pregnancy but it is unclear whether they achieve viral suppression and how this varies with time on ART in Malawi. Investigators from the Bwaila district hospital study also looked prospectively at the association between time on ART and viral load (> 1000 and >40 copies/mL) at delivery in the newly diagnosed women.

This study was also conducted at Bwaila Hospital, in the cohort of 299 women.

Prevalence of elevated ALT at baseline was 0.3%, 0.4% at month 3, and 7.2% at month 6. The 6-month incidence of elevated ALT was 7.9%. Only 3 women (1.1%) had DAIDS Grade 3 or 4 ALT levels. All 3 women were postpartum and not taking other hepatotoxic medications. Of these women, one remained on TDF/3TC/EFV with resolved ALT levels, one switched to a non-EFV regimen, and one died of fulminant hepatitis despite ART discontinuation.

This analysis found no significant association with low CD4 count (p=0.62) or WHO stages >2 (p=0.28, although twice as many women developed elevated ALT compared with stage 1: 13.3 vs 6.7%) with the development of hepatoxicity. Data on viral hepatitis co-infection status were not available.

The investigators suggested that symptom monitoring is likely reasonable under a public health approach.

This cross-sectional study aimed to estimate the prevalence of syphilis and describe risk factors in this population.

Women were screened for syphilis using point-of-care rapid Alere determine TP tests. All women who tested positive were treated on the same day with a single dose of benzathine penicillin by intramuscular injection. Women testing positive were also encouraged to send their partners for treatment.

The prevalence of syphilis in these women was 6% (95% CI 3.9% to 9.0%). Relationship duration was shorter in women testing positive for syphilis but this was not statistically significant. No factors (level of education, parity, marital status, WHO staging, and partner characteristics for current pregnancy) were significantly associated with the prevalence of syphilis.

Nearly half of the women in an antenatal depression study self-reported a history of anxiety or depression. [11]

Women included in this baseline analysis (n=729) were starting ART for the first time or had been on ART for 6 months or more.

The investigators assessed depressive symptoms using the Edinburgh Postnatal Depression Scale (EPDS). In Malawi, a score of >6 has been shown to indicate probable major depression, and was considered a positive result.

The majority of women were currently married (90%), unemployed (62%), and had not intended their pregnancy (68%). Nine percent (n=68) of women screened positive for depression, and 46% (n=328) self-reported a history of depression or anxiety.

Education and having an HIV positive partner protective against ART failure

An analysis of treatment failure among women already receiving ART at first antenatal visit found an overall prevalence of 7%. [12] Having more education and having an HIV positive partner were protective against ART failure.

The investigators suggested countries with limited resources for viral load screening at first antenatal clinic visit should develop mechanisms to identify women at risk of having developed ART failure to prompt switch to an alternative and effective regimen during pregnancy.

The addition of a Saturday clinic is a feasible way to reduce visit duration and accommodate retention in care. [13]

The Bwaila Hospital study enrollment did not meet its targets in the first year due to constraints including a shortage of clinic space and clinic overcrowding. The investigators hypothesised that adding a Saturday clinic would reduce overcrowding and visit duration during the week and would improve retention and enrollment.

This was an observational study of participant visit duration before and after Saturday clinic introduction and an anonymous Likert-type scale acceptability survey.

The investigators observed a total of 77 visits: 28 before and 49 after adding the Saturday clinic. They found the average time spent with a nurse during a follow-up visit went down from 78 minutes before to 57 minutes after the addition of the Saturday clinic, p=0.0337. But the average time spent with a clinician was not significantly affected, p=0.270.

The majority of women surveyed on both weekdays and Saturdays reported that time spent in clinic was acceptable. Six out of the 46 women surveyed said that Saturday was their preferred day. The effect of adding the Saturday clinic on retention is yet to be determined.

The addition of a Saturday clinic is a feasible way to reduce visit duration and accommodate retention. Subject surveys indicate this is an acceptable way to decrease crowding and improve subject satisfaction.

The 11th INTEREST Workshop included an abundance of data from the Malawi Option B+ programme. But some of these summaries are a bit sketchy as unfortunately not all the posters materialised at the meeting.

The observation that women with partners who have not disclosed their HIV status are more likely to transmit to their infants is important. This is the first time that HIV status disclosure between partners has been documented to affect vertical transmission at national level.

The study looking at contraception also noted that in Malawi 33% of pregnancies are mistimed and 11% unwanted. And 39% discontinue their modern contraceptive within 12 months due to method-related concerns/side effects (26%) or desire to become pregnant (26%). It would be interesting to know if any of the women with unintended pregnancies on ART and using contraception were using hormonal implant methods and this could be linked to EFV. This study highlights a missed opportunity to engage women in ART programmes with family planning.

The study linking longer duration of ART with viral suppression at delivery came as no surprise. That under a third of women had viral load <40 copies/mL is likely to be improved with the introduction of dolutegravir and swifter viral decline.

All references are to the programme and abstracts of the 11th International workshop on treatment, pathogenesis and prevention work in resource-limited settings (INTEREST), 16-19 May 2017, Lilongwe, Malawi (published in Reviews in Antiviral Therapy & Infectious Diseases 2017_02).