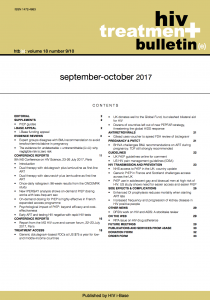 This issue of HTB starts with two evidence reviews.

The first is an analysis of the data used in a recent Cochrane review of HIV drugs used during pregnancy. The BMJ, in addition to publishing the review, also produced worrying  ‘rapid  recommendations’ that challenged current guidelines, including those from WHO and BHIVA.

The i-Base article from Polly Clayden shows how easily the Cochrane methodology can produce misleading results. Far from being trustworthy, the BMJ initiative has more likely led to harm and concern. The BMJ were also quickly challenged both by key researchers and BHIVA (whose response we also publish later in this issue).

A second i-Base review provides an overview of 20 years of accumulating evidence to support the statement that ART effectively prevents HIV sexual transmission. But while many prominent doctors, scientists and healthworkers, including the US CDC, now endorse the Untedectable = Untransmittable (U=U) statement, reviewing the compelling the evidence is just as essential for those who are less convinced.

This issue of HTB also includes further conference reports on ART and PrEP from IAS 2017 in Paris and on advances in cure research from a related meeting on HIV and cancer.

PrEP features in other articles, including the regional differences in the UK for accessing PrEP: yes, no and maybe depending on whether you live.

Plus journal reviews on OI prophlaxis and HIV and kidney disease and links to an impressive issue of the US community publication RITA focused on HIV and drug adherence and a UK review of DFIDs international HIV funding.

And we cover the most exciting news for global HIV: a new pricing agreement that will enable treatment in low- and middle-income countries with new dolutegravir-based fixed dose combinations at an annual cost per person of around US $75.