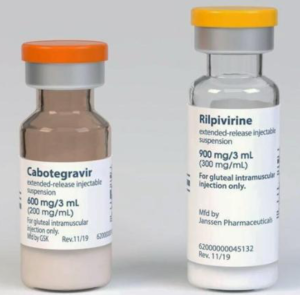 CAB-LA and RPV-LA, given as separate intramuscular injections.

On 18 November 2021, after several delays, NICE announced the long-awaited decision to approve an injectable HIV combination that is given every two months.

Access is expected by April 2022, and estimated for expected use by up to 13% of people living with HIV. [1]

Long-acting cabotegravir plus rilpivirine (CAB/RPV-LA) currently involves oral tablets for the first month, higher dose first injections, and then two separate intramuscular injections every two months. Injections need to be given by a health professional.

Approval is as a switch option for people who already have an undetectable viral load on their current oral combination, and who do not have drug resistance or a history of previous treatment failure with similar drugs.

Importantly, the statement from NICE does not expect to make injectable ART an option for everyone. It modelled that up to 13,000 people might want to use CAB/RPV-LA. This is approximately 1 in 6 (~15%) of people currently living with HIV in the UK. Criteria for deciding access if demand proves to be much higher are not included in the announcement.

Approval is based on results from the large international FLAIR, ATLAS and ATLAS-2M phase 3 studies. CAB/RPV-LA originally involved monthly injected but the ATLAS-2M study showed similar efficacy from two-monthly dosing. ATLAS-2M also included a sub-study looking at whether the monthly oral dosing might be able to be dropped in the future. This option is already referred to in the European prescribing information.

The combination is marketed by ViiV Healthcare with separate trade names for cabotegravir-LA (Vocabria) and rilpivirine-LA (Rekambys, developed by Janssen). In the US, both drugs are packaged together, with a single trade name Cabenuva.

The expected timeline for first access is April 2022, meeting the requirement for access to be within three months of final published advice (expected January 2022). Access in Wales should be within two months.

Please see full details on both drugs for further information. The i-Base “Know your meds” resource includes summary information with links to the full prescribing information on the EMA website. [4, 5, 6]

Approval and significant access is strongly welcomed, and is likely to have reflected strong and consistent community support for the importance of alternative treatments to oral tablets. This included examples of how long-acting treatment could improve quality of life for a wide range of people living with HIV, by helping to overcome continued high levels of stigma and discrimination. [7]

News of the decision was handled less well by NICE however. Many clinics spent the day explaining that access was not going to be for several months: not until April in England but possibly a month earlier in Wales

The development of new and improved treatments are significant scientific advances, and this can only be justified if they then become widely available for people living with HIV. The announcement from NICE means that the NHS is also prepared to pay higher prices compared to standard HIV treatments.

Approval is also an important signal for other long-acting HIV drugs in development. If results from ongoing studies with other compounds are similarly effective, future options might include once-weekly oral ART and six-monthly injectable ART.

The NICE review documents are important for including personal preference as being an acceptable reason to access injectable ART, but they don’t include guidance for criteria for how this would be managed if demand turns out to be high, especially as injectable ART is likely to be priced higher than most current combinations that include generic drugs.

The list price for the two-monthly doses of CAB-LA (Vocabria) and RPV-LA (Rekambys) is approximately £1200 and £440 respectively: just short of £10,000 for a year. VAT will increase this further when medicines are dispensed at a clinic. The discounted NHS price has not been published, but unless the discount is considerable, this is likely to be significantly higher and perhaps double the price of many oral combinations. This might therefore also be the first example for many years where premium pricing has been allowed for a new combination.

The cost-effectiveness analysis included that CAB/RPV-LA was within the higher range of £20,000 to £30,000 per quality adjusted life year (QALY), considered acceptable by NHS England. This was even if injectable ART has no impact on improving adherence – a contested issue in the submission.

So this is an exciting time for HIV treatment. While many new issues relating to injectable ART are still being explored, these are likely to become much more clear with wider use.

It also includes results from a recent report that 1 in 5 participants who discontinued injectable ART in phase 3 studies did not return to oral ART. [8]

The extremely long half-lives for these drugs would make development of drug resistance highly likely to one or both drug classes in this combination. Detectable drug levels are still common more than a year after the last injection and in some cases have still been reported after several years.

This report was first posted on 18 November 2021. It was updated on 5 January 2021 to include NICE publication of the technology appraisal.